The quality of life and economic health of a community is closely tied to the reliability, safety and physical condition of its transportation system.  An efficient, safe and well-maintained transportation system provides economic and social benefits by providing individuals access to employment, housing, healthcare, education, goods and services, recreation and social activities while connecting businesses to suppliers, markets, and employees.

TRIP has prepared individual reports on travel trends, traffic safety, and road and bridge conditions in each of Kentucky’s 12 Highway Districts. This summary document includes information for each Highway District and statewide.

Sources of information for the report include a survey of county governments by the Kentucky Magistrates & Commissioners Association (KMCA), the Kentucky Office of Highway Safety and the Federal Highway Administration (FHWA).

Kentucky was home to 4.4 million residents in 2016, based on estimates from the U.S. Census Bureau.   Vehicle travel in the state totaled 49.5 billion miles in 2016, an increase of five percent since 2013 (according to the Federal Highway Administration).

The life cycle of Kentucky’s roads is greatly affected by the state and local governments’ ability to perform timely maintenance and upgrades to ensure that road and highway surfaces last as long as possible.

The chart below details pavement conditions on county maintained roads statewide and in each of the state’s 12 Highway Districts.

CHART 1: Share of county maintained roads in poor, fair or good condition in each Highway District and statewide. 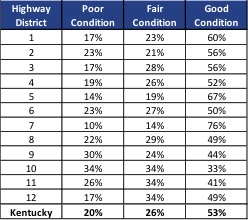 Roads rated poor may show signs of deterioration, including rutting, cracks, and potholes. In some cases, poor roads can be resurfaced but often are too deteriorated and must be reconstructed. Roads rated in fair condition may show signs of significant wear and may also have some visible pavement distress. Most pavements in fair condition can be repaired by resurfacing, but some may need more extensive reconstruction to return them to good condition.

Pavement failure is caused by a combination of traffic, moisture, and climate. Moisture often works its way into road surfaces and the materials that form the road’s foundation. Road surfaces at intersections are even more prone to deterioration because the slow-moving or standing loads occurring at these sites subject the pavement to higher levels of stress. It is critical that roads are fixed before they require major repairs because reconstructing roads costs approximately four times more than resurfacing them.

The chart below details the share of miles of county-maintained roads in each Highway District and statewide that are in need of resurfacing or reconstruction, as well as the share that are projected to be resurfaced or reconstructed in 2017 with the current amount of funding available.

Chart 2. Share of county-maintained roads in need of resurfacing or reconstruction and share that will be able to be resurfaced or reconstructed in 2017. 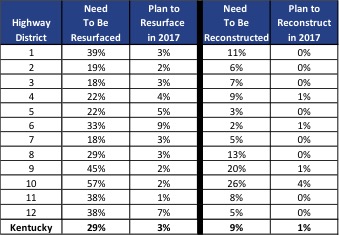 Kentucky has 14,265 bridges that are at least 20 feet long and are included in the . According to NBI data, in 2016, 1,110 of these bridges (eight percent) were rated as structurally deficient.

A bridge is structurally deficient if there is a significant deterioration of the bridge deck, supports or other major components. Bridges that are structurally deficient may be posted for lower weight limits or closed if their condition warrants such action. Deteriorated bridges can have a significant impact on daily life. Restrictions on vehicle weight may cause many vehicles – especially emergency vehicles, commercial trucks, school buses and farm equipment – to use alternate routes to avoid weight-restricted bridges. Redirected trips also lengthen travel time, waste fuel and reduce the efficiency of the local economy.

The following chart provides information on the share of structurally deficient bridges statewide and in each Highway District.

CHART 3: Share and percentage of structurally deficient bridges in each Highway District and statewide. 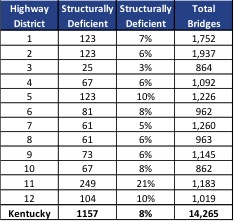 The severity of serious traffic crashes could be reduced through roadway improvements, where appropriate, such as adding turn lanes, removing or shielding obstacles, adding or improving medians, widening lanes, widening and paving shoulders, improving intersection layout, and providing better road markings and upgrading or installing traffic signals. Roads with poor geometry, with insufficient clear distances, without turn lanes, lacking or having narrow shoulders for the posted speed limits, or poorly laid out intersections or interchanges, pose greater risks to motorists, pedestrians, and bicyclists.

According to TRIP analysis of data provided by the Kentucky Office of Highway Safety, the traffic fatality rate in Kentucky during the three-year period of 2014 to 2016 was 1.54 deaths per 100 million miles of vehicle travel. This compares with a national average of 1.08.

The chart below details the average number of traffic fatalities and serious injuries each year from 2014-2016, the share of fatalities involving the vehicle leaving the roadway during that time and the fatality rate per 100 million vehicle miles of travel (VMT).

Chart 4. Traffic fatalities, serious injuries, share of fatalities involving the vehicle leaving the roadway and the fatality rate per 100 million vehicle miles of travel in each Highway District and statewide. 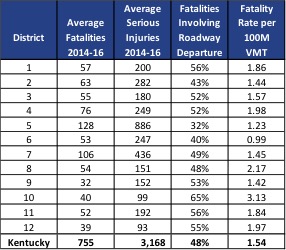