Mississippi Motorists Lose $2.9 Billion Per Year On Roads That Are Rough, Congested & Lack Some Desirable Safety Features – As Much As $2,000 Per Driver. Costs Will Rise And Conditions Will Worsen Without Increased Funding 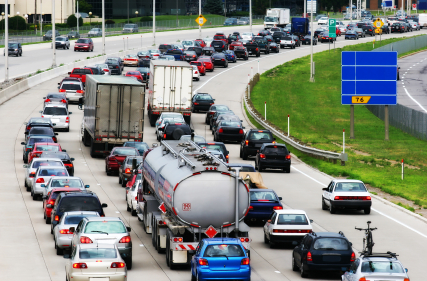 Roads and bridges that are deteriorated, congested or lack some desirable safety features cost Mississippi motorists a total of $2.9 billion statewide annually – as much as $2,046 per driver in some urban areas – due to higher vehicle operating costs, traffic crashes and congestion-related delays. Increased investment in transportation improvements at the local and state levels could relieve traffic congestion, improve road, bridge and transit conditions, boost safety, and support long-term economic growth in Mississippi, according to a new report released today by TRIP, a Washington, DC based national transportation organization.

The TRIP report, “Mississippi Transportation by the Numbers: Meeting the State’s Need for Safe Smooth and Efficient Mobility,” finds that throughout Mississippi, nearly two-thirds of major locally and state-maintained urban roads are in poor or mediocre condition and 12 percent of Mississippi’s locally and state-maintained bridges are structurally deficient. The state’s major urban roads are becoming increasingly congested, with drivers wasting significant amounts of time and fuel each year. And, more than 3,100 people were killed on the state’s roads from 2011 to 2015. Mississippi had the third highest traffic fatality rate in the nation in 2015.

Driving on Jackson area roads costs Mississippi drivers a total of $2.9 billion per year in the form of extra vehicle operating costs (VOC) as a result of driving on roads in need of repair, lost time and fuel due to congestion-related delays, and the costs of traffic crashes in which the lack of adequate roadway safety features likely were a contributing factor. The TRIP report calculates the cost to motorists of insufficient roads in the Gulfport-Biloxi-Pascagoula, Hattiesburg, Jackson and Southaven-DeSoto County urban areas. A breakdown of the costs per motorist in each area along with a statewide total is below.

“Municipalities in Mississippi are responsible for more than 23,000 street miles,” said Jimmy Clyde, mayor of Magee and president of the Mississippi Municipal League.  “As a mayor, I can confirm that one of most requested services from my citizens is better and safer streets. More than half of Mississippi citizens live in municipalities, and they expect and deserve safe, well-maintained streets. The cost of providing and maintaining streets and bridges continues to outpace current municipal revenue streams.  Raising property taxes should not be the only recoursefor generating new revenue. If cities and towns can improve their street infrastructure, the climate for economic development will continue to improve and more jobs can be created for all Mississippians.”

Twelve percent of Mississippi’s bridges are structurally deficient, with significant deterioration to the bridge deck, supports or other major components.

The efficiency and condition of Mississippi’s transportation system, particularly its highways, is critical to the health of the state’s economy. Annually, $277 billion in goods are shipped to and from sites in Mississippi, mostly by truck. Seventy-seven percent of the goods shipped annually to and from sites in Mississippi are carried by trucks and another eight percent are carried by courier services or multiple mode deliveries, which include trucking.

“The condition of Mississippi’s transportation system will worsen in the future without additional funding, leading to even higher costs for drivers,” said Will Wilkins, TRIP’s executive director. “In order to promote economic growth, foster quality of life and get drivers safety and efficiently to their destination, Mississippi will need to make transportation funding a top priority.”

MISSISSIPPI TRANSPORTATION BY THE NUMBERS: 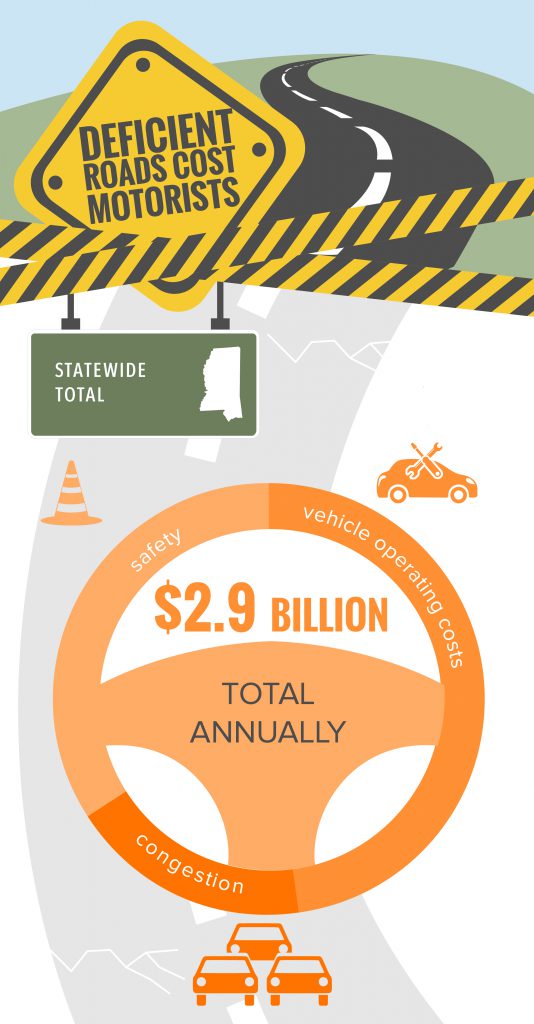 An efficient, safe and well-maintained transportation system provides economic and social benefits by affording individuals access to employment, housing, healthcare, education, goods and services, recreation, entertainment, family, and social activities. It also provides businesses access to suppliers, markets and employees, all critical to a business’ level of productivity and ability to expand. Reduced accessibility and mobility – as a result of traffic congestion, a lack of adequate capacity, or deteriorated roads, highways, bridges and transit facilities – diminishes a region’s quality of life by reducing economic productivity and limiting opportunities for economic, health or social transactions and activities.

With an economy based largely on agriculture, tourism and manufacturing, the quality of Mississippi’s transportation system plays a vital role in the state’s economic growth and quality of life.

In this report, TRIP looks at the top transportation numbers in Mississippi as the state addresses modernizing and maintaining its system of roads, highways, bridges and transit.

Population and economic growth result in increased demands on major roads and highways, leading to increased wear and tear on the transportation system.

A lack of adequate state and local funding has resulted in nearly two of every three miles of major urban roads and highways in Mississippi having pavement surfaces in poor or mediocre condition, providing a rough ride and costing motorists in the form of additional vehicle operating costs.

Twelve percent of locally and state-maintained bridges in Mississippi show significant deterioration. This includes all bridges that are 20 feet or more in length.

Improving safety features on Mississippi’s roads and highways would likely result in a decrease in the state’s traffic fatalities and serious crashes. It is estimated that roadway features are likely a contributing factor in approximately one-third of all fatal and serious traffic crashes.

Increasing levels of traffic congestion cause significant delays in Mississippi, particularly in its larger urban areas, choking commuting and commerce. Traffic congestion robs commuters of time and money and imposes increased costs on businesses, shippers and manufacturers, which are often passed along to the consumer.

Investment in Mississippi’s roads, highways and bridges is funded by local, state and federal governments. The current five-year federal surface transportation program includes modest funding increases and provides states with greater funding certainty, but falls far short of providing the level of funding needed to meet the nation’s highway and transit needs. The bill does not include a long-term and sustainable revenue source.

TRANSPORTATION AND ECONOMIC GROWTH IN MISSISSIPPI

The efficiency of Mississippi’s transportation system, particularly its highways, is critical to the health of the state’s economy. Businesses rely on an efficient and dependable transportation system to move products and services. A key component in business efficiency and success is the level and ease of access to customers, markets, materials and workers.