OHIO MOTORISTS LOSE A TOTAL OF $12 BILLION PER YEAR ON ROADS THAT ARE ROUGH, CONGESTED & LACK SOME SAFETY FEATURES– AS MUCH AS $2,180 PER DRIVER. INCREASED INVESTMENT HAS ALLOWED SOME COLUMBUS TRANSPORTATION PROJECTS TO MOVE FORWARD, BUT MANY REMAIN STALLED DUE TO LACK OF FUNDING

Roads and bridges that are deteriorated, congested or lack some desirable safety features cost Ohio motorists a total of $12 billion statewide annually – as much a $2,180 per driver in some urban areas – due to higher vehicle operating costs, traffic crashes and congestion-related delays. Increased investment in transportation improvements at the local, state and federal levels could relieve traffic congestion, improve road, bridge and transit conditions, boost safety, and support long-term economic growth in Ohio, according to a new report released todayby TRIP, a Washington, DC based national transportation research organization.

The TRIP report, “Modernizing Ohio’s Transportation System: Progress and Challenges in Providing Safe, Efficient and Well-Maintained Roads, Highways and Bridges,”finds that throughout Ohio, approximately one-third of major locally and state-maintained urban roads are in poor or mediocre condition, seven percent of locally and state-maintained bridges are structurally deficient, and increasing congestion is causing significant delays for commuters and businesses. TRIP’s report examines the impact of additional funds provided largely by the use of Ohio Turnpike bond proceeds, and documents the state’s significant short-term and long-term transportation funding shortfalls. It includes lists of needed transportation projects in the state’s largest urban areas that have adequate funding to proceed by 2023, and needed projects in each area that lack funding to proceed.

The TRIP report calculates the cost to motorists of insufficient roads in the Cincinnati, Cleveland-Akron, Columbus, Dayton and Toledo urban areas. These costs come in the form of extra vehicle operating costs (VOC) as a result of driving on roads in need of repair, lost time and fuel due to congestion-related delays, and the costs of traffic crashes in which roadway features likely were a contributing factor. A breakdown of the costs per motorist in the state’s largest urban areas along with a statewide total is below.

The TRIP report finds that 23 percent of Ohio’s major urban roads are in poor condition and 12 percent are in mediocre condition, costing the state’s drivers a total of $3.5 billion each year in extra vehicle operating costs, including accelerated vehicle depreciation, additional repair costs, and increased fuel consumption and tire wear.

Traffic congestion throughout Ohio is worsening, costing drivers in the state’s largest urban areas as much as $1,057 annually in lost time and wasted fuel. Drivers in the most congested areas lose 44 hours each year – more than five working days – stuck in traffic congestion.

Seven percent of Ohio’s bridges are structurally deficient, with significant deterioration to the bridge deck, supports or other major components.

“The TRIP report succinctly outlines current transportation infrastructure conditions and how transportation impacts economic development in Ohio,” said Brian O. Martin, AICP, executive director of the Miami Valley Regional Planning Commission. “Businesses look to relocate and grow in a region with a robust transportation system and our region continues to lag. Insufficient local and state resources require an immediate increase in federal funding to shore up the region’s deficient infrastructure so that we can compete. Our elected representatives in Washington, D.C. must address this issue sooner than later.”

Traffic crashes in Ohio claimed the lives of 5,360 people between 2012 and 2016- an average of 1,072 fatalities per year. The fatality rate on Ohio’s non-interstate rural roads in 2016 was approximately two-and-a-half times higher than on all other roads in the state (1.84 fatalities per 100 million vehicle miles of travel vs. 0.71).

The efficiency and condition of Ohio’s transportation system, particularly its highways, is critical to the health of the state’s economy.  Annually, $1.1 trillion in goods are shipped to and from sites in Ohio, relying heavily on the state’s network of roads and bridges. Increasingly, companies are looking at the quality of a region’s transportation system when deciding where to re-locate or expand. Regions with congested or poorly maintained roads may see businesses relocate to areas with a smoother, more efficient and more modern transportation system.

“These conditions are only going to get worse, increasing the additional costs to motorists, if greater investment is not made available at the state and local levels of government,” said Will Wilkins, TRIP’s executive director. “Without adequate funding, Ohio’s transportation system will become increasingly deteriorated and congested, hampering economic growth, safety and quality of life.” 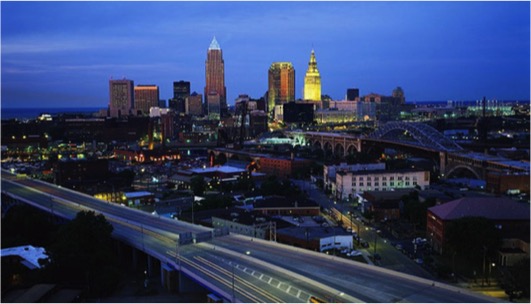 Located within a day’s drive of 60 percent of the population of the United States and Canada, Ohio can capitalize on its central location by maintaining and modernizing its roads, highways and bridges by improving the physical condition of its transportation network; and, by enhancing the system’s ability to provide efficient, reliable and safe mobility for residents, visitors and businesses.  Ohio maintains one of the most extensive and heavily traveled transportation systems in the nation.  Ohio ranks second nationally among states in the number of bridges, third in the volume of freight carried on its transportation system, and sixth in both miles of Interstate highways and total vehicle miles traveled (VMT).  Making needed improvements to Ohio roads, highways, bridges and transit systems could also provide a significant boost to the state’s economy by creating jobs in the short term and stimulating long-term economic growth as a result of enhanced mobility and access.

Driving on Ohio’s transportation system costs the state’s motorists a total of $12 billion every year in the form of additional vehicle operating costs (VOC), congestion-related delays and traffic crashes.

Ohio has been able to boost its highway investments through the use of Ohio Turnpike bond proceeds, but state highway funding is slated to decrease significantly in 2019.  Ohio faces both a short-term shortfall in funding for projects to expand highway capacity and a long-term shortfall in funding to maintain the condition and level of service of its roads, highways, bridges and public transit systems. 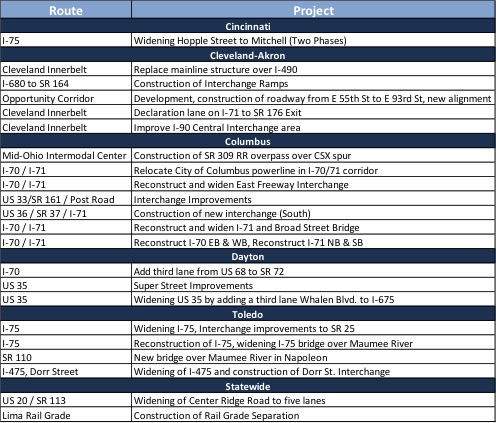 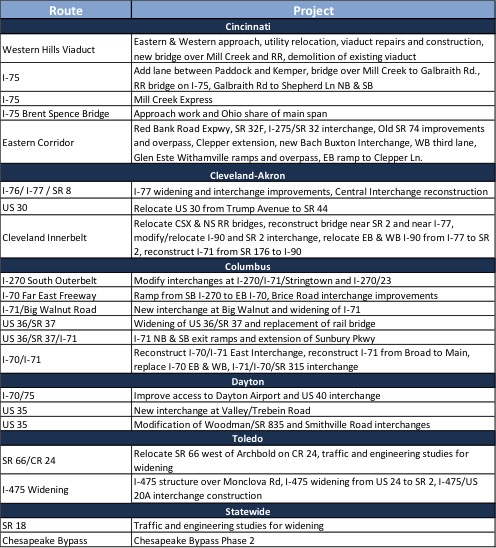 Inflation has reduced significantly the buying power of the federal and Ohio motor fuel user fees, which are critical funding sources for Ohio road, highway and bridge repairs and improvements.

A lack of adequate state and local funding has resulted in approximately one-third of major urban roads and highways in Ohio having pavement surfaces in poor or mediocre condition, providing a rough ride and costing motorists in the form of additional vehicle operating costs.

One-in-fourteen locally and state-maintained bridges in Ohio show significant deterioration and are rated structurally deficient. This includes all bridges that are 20 feet or more in length.

Increasing levels of traffic congestion cause significant delays in Ohio, particularly in larger urban areas, choking commuting and commerce. Traffic congestion robs commuters of time and money and imposes increased costs on businesses, shippers and manufacturers, which are often passed along to the consumer.

Improving safety features on Ohio’s roads and highways would likely result in a decrease in the number of traffic fatalities and serious crashes.

TRANSPORTATION AND ECONOMIC GROWTH IN OHIO

The efficiency of Ohio’s transportation system, particularly its highways, is critical to the state’s economy.  A key component in business efficiency and success is the level and ease of access to customers, markets, materials and workers.  The design, construction and maintenance of infrastructure in Ohio is a significant source of employment in the state.