Life in the landfill is hard on equipment. The constant pushing of garbage and dirt puts a heavy strain on the hydraulics and drive train of large bulldozers. Compactors take a constant beating to prepare the trash to be covered.

It’s a dirty, harsh work environment that’s tough on equipment. And it’s a job that cannot afford any downtime: If the trash isn’t covered by the end of the workday – a legal requirement – no one goes home until it is.

The same can be said about heavy equipment service mechanic Carlos Pineda. The resident mechanic contracted by Caterpillar dealer Peterson Tractor Co. of San Leandro, Calif., Pineda spends every day servicing and repairing these machines at Waste Management’s landfill in nearby Fremont. The tools he uses – air compressors, generators and a hydraulic crane – are typically run from a truck’s Power Take-Off (PTO), which puts wear and tear on its diesel engine and drive train. The PTO requires the truck to constantly idle, a factor that puts a significantly higher number of hours on the truck’s engine compared to just driving it to and from the work site.

Recognizing the need for a better solution to power equipment on a mechanic’s trucks, Miller Electric Mfg. Co. introduced EnPak Mechanic Series, a completely self-contained air compressor, hydraulic pump and generator that runs off its own 27-horsepower diesel engine. This eliminates the need for a PTO on a mechanic’s truck and allows these tools to work without running the truck’s engine. Pineda reports that EnPak has made his truck more fuel efficient, reduced his truck’s engine hours and improved the operating environment around his truck.

For a heavy equipment mechanic like Pineda, his workshop is completely mobile. The typical mechanic’s truck carries all the other tools required to do the job: impact wrenches, grinders, lights, a computer for diagnostics, etc. Each truck travels to and from the job site daily and then idles all day as the mechanic powers this equipment off the truck’s PTO. With the introduction of EnPak, Pineda has completely changed the way he uses his truck.

“What I like the most about EnPak is that my truck doesn’t run now as I work,” he said. “There’s no wear and tear on my truck. I don’t put a bunch of hours on it just by idling and burning fuel for no reason, polluting the air. EnPak puts out a minimum amount of exhaust, a minimum amount of noise, and it powers all of my components as if the truck was running.”

The primary tool of any heavy equipment mechanic is an air compressor used to run impact wrenches and the carbon arc gouging capabilities of the welder. Pineda claims that EnPak gives him more consistent air compressor performance than the old compressor he ran off the truck’s PTO.

“I like the fact that the air compressor gives me on-demand air,” Pineda explained. “I can run my big heavy guns and not have to wait for the air to build back. With the old system, I could undo one or two fasteners at a time and then would have to wait for the compressor to build air back up. If there are 30 bolts and I have to wait a minute to take each bolt off, that’s a half-hour wasted. EnPak produces such a volume of air that I can run my gun without stopping. It’s very productive.” 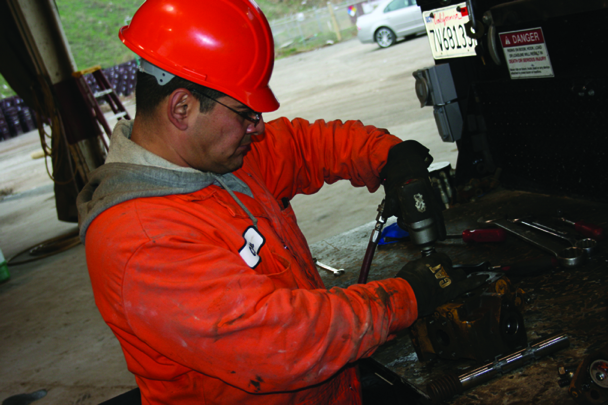 EnPak’s rotary screw air compressor is rated at 40 cfm at 100 psi and is constantly able to produce up to 175 psi without stopping. Pineda reports that he can effectively use EnPak’s air compressor and hydraulic pump simultaneously without any lag in power. The variable displacement hydraulic pump (Eaton) is rated at 3,000 psi at 8.5 gpm with a maximum flow of 20 gpm.

“EnPak lets me use both air and hydraulics at the same time without slowing down,” Pineda said. “Sometimes I need to use my crane to support a piece when I’ll be using my impact gun to remove fasteners, and that all comes into play when you are disassembling a large machine.”

Another key tool for any mechanic is a generator. On many mechanic’s trucks, this is accomplished with a welding generator or a stand-alone generator. EnPak eliminates the need for either of these by producing 6,000 watts of power that can run welders and other power tools. It also offers 2,400 watts of pure sine wave EnVerter power (available at all engine speeds) to power items such as work lights, battery chargers and laptops used to check service codes and monitor the operating conditions of a machine.

“I use the generator mostly for running big hydraulic rams or when I need a lot of psi to run a track press,” Pineda said. “It runs the pumps without stopping or slowing down. I use it for my droplights, my drills. I’ve also used it to run a welder.”

Easier to Work, Easier to Operate

Another key benefit of EnPak is a substantially improved operator environment. Mechanics work almost entirely off the back of their trucks. The loud noise of a running truck combined with the noise of running tools and the truck’s exhaust creates a nasty mix of distractions for the mechanic. Tests have shown that EnPak reduces jobsite sound levels by as much as 10 dB, and a vertical exhaust forces fumes up and away from the work environment (in addition to eliminating the truck’s exhaust).

“If you’re working around high decibels, it puts a stress level on you that should be avoided,” said Jack Ravazza, general service manager, Peterson Tractor. “I think reduced noise can have a big effect on the performance of a technician. The better environment, the more productivity he is going to have.”

EnPak’s integrated control design also makes life easier on Pineda by providing all of the controls he needs right at the back of the truck.

“The EnPak remote panel lets me start all the functions from the back of the truck without having to go and climb into my cab, turn the PTO on, then climb back out and start working. I can just go right to the back panel, start the component and I’m ready to work.”

The remote panel also monitors, operates and provides diagnostics for engine and air compressor functions such as fuel usage and engine rpm. And Pineda didn’t have to learn any new controls as the integrated design allows him to use the crane remote he is already familiar with.

“Within five minutes I was running EnPak and all my tools like nothing had changed,” he recalled.

EnPak is completely integrated into the fuel and electrical systems of Pineda’s truck. Now he only has one tank to fill up in the morning compared to the two tanks he used to fill up every day (truck and engine-driven welding generator). Because it runs with the truck turned off, it lowers fuel use by as much as 30 percent and can reduce truck engine hours by as much as 60 percent. It also features Miller’s EnPower technology, which adjusts engine speed to match compressor and hydraulic load requirements, so that Pineda’s truck only burns as much fuel as necessary for the job.

“I can honestly say that I hardly see any fuel use,” said Pineda. “I can start out with a quarter-tank of fuel in the truck, run EnPak for two or three hours, and the needle on the fuel gauge hasn’t moved. It’s very fuel-efficient. And with the truck shut off, there’s not any hours being put on the engine or the transmission. That extends the life of the component two or three times longer than if you had to run them all the time.”

Ravazza – whose job it is to make sure Peterson Tractor’s customers’ needs are being met both through tooling and manpower – sees an obvious value to the reduced wear on the truck and the savings it provides equipment service departments.

“Our truck idling time to run tools is close to 50 percent,” he said. “Eliminate that and you’ll have substantial savings on truck engine life and fuel. And it will help us meet the ever-tightening emissions regulations on idling trucks put in place by California.”

Note: This article appeared in the September 2009 Issue of California Builder & Engineer, an ACP magazine.