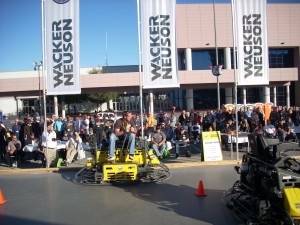 Held in Wacker Neuson’s outdoor exhibit, (#O31708 silver lot) the ride-on trowel challenge tests the operator’s entire range of speed and accuracy skills as the participant maneuvers around an obstacle course that weaves throughout a 2,400 square foot slab.  Wacker Neuson’s trowel challenge competition has become a real crowd pleaser at the annual World of Concrete show.  Every year, over 150 concrete trowel operators participate throughout the qualifying rounds held the first three days of the show.  The top 10 finishers, based on their qualifying times, then compete for the fastest finisher award on Thursday afternoon (this year January 26, 2012).  Hundreds of WOC spectators gather to see who will be crowned the fastest finisher.  All registered World of Concrete contractor attendees are eligible to compete on a first-come, first-serve basis.

If you are an operator or a spectator, you won’t want to miss this exciting competition.  See you at Wacker Neuson’s outdoor booth in the Silver Lot, #O31708 at WOC.  To learn more about the Wacker Neuson Trowel Challenge, visit www.trowelchallenge.com