Employers added another 5,300 jobs in March across Minnesota following February’s 6,200-job gain, which was stronger than first reported. The unemployment rate fell 0.2 percentage points to 3.8 percent in March.

Non farm payrolls were up by 5,300 jobs in Minnesota, all of which were in the private sector. Government employment was unchanged on the month. Professional & business services payrolls rose by 4,900 jobs—most of the gain was in administrative positions. Management and professional & tech services added 1,100 and 300 jobs, respectively. Mining & logging added 400 jobs in March which brings its year-to-year gain to 861 jobs, a welcome contrast from this time last year when the Iron Range was cutting positions due to the decline in commodity prices. Manufacturers also added jobs in March which brought factory payrolls above their year-ago level for the first time in nine months. Construction hiring took a breather in March but remains one of the fastest growing sectors over the year, rising 5.6 percent.

The most recent Occupational Employment data show more Minnesotans work in health care, personal care services, management and computer & mathematics than a decade ago, while there are fewer office support, sales, production and construction workers. Production and office support jobs have become increasingly vulnerable to automation. By contrast, food services saw a large jump in its share of jobs nationwide over the past ten years, but not in Minnesota. There were 60 percent more personal services workers in Minnesota in 2016 than in 2006, however, the largest increase among occupation groups. This category counts personal care aides, where demand is being driven by the state’s older population. Unfortunately, personal care services median earnings were the second lowest, besting only food services workers.

There were also strong increases among Minnesota’s high-paying jobs. Minnesota’s increase in management positions over the past decade was particularly notable, with the category adding 36,300 positions and accounting for 28.5 percent of the new jobs over the decade. Management positions are the highest paying occupation category in the state. The typical management job earned $100,290 in 2016, 2.5 times the average job. Healthcare practitioners & technical workers, which include doctors, nurses, therapists and technicians—saw the third largest increase, while computer & math jobs saw the fourth largest rise over the decade. All this is good news for Minnesota’s highly-educated workforce. Conversely, the decline in production, construction, sales and administration positions means options have narrowed for those without advanced training or qualifications, which has hindered economic mobility within the state. 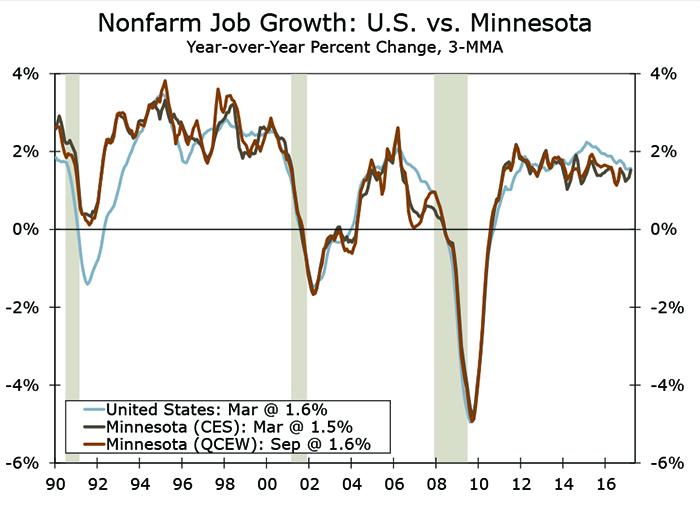 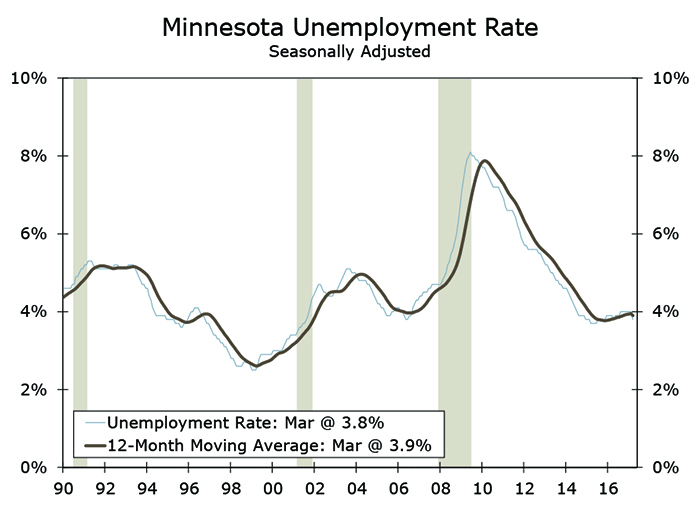 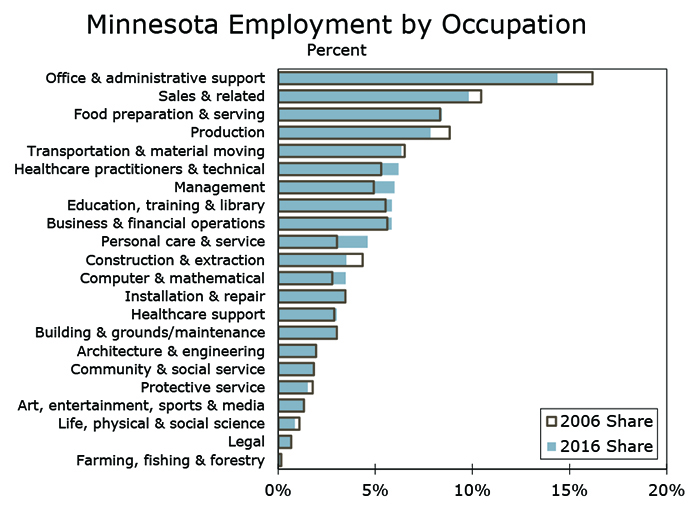