The pace of hiring decelerated slightly, as the late Easter held seasonally-adjusted nonfarm job growth to just 6,200 net new jobs. Hiring is growing twice as fast in Florida on a year-over-year basis than it is nationwide.

This Year’s Late Easter Held Back Hiring in March

The later arrival of Easter this year appears to have held back nonfarm employment growth. Nonfarm employment rose by 6,200 jobs in March on a seasonally-adjusted basis, with employment in the leisure & hospitality industry posting an outsized 9,400-job loss during the month. With Easter coming later this year, Spring Break travelers—which include much more than college kids—arrived a little later than usual this year. Hiring was also likely held back in the retail sector during the month.

On a non-seasonally adjusted basis, Florida added 52,000 jobs in March, with the leisure & hospitality industry adding 14,000 jobs and retailers adding 3,100 jobs. The split between the adjusted and unadjusted numbers drives home the importance of understanding how the seasonal adjustment process can sometimes distort the data in exactly the opposite way it is intended to. The more relevant data for Florida is that job growth on a year-over-year basis is rising solidly, climbing 3.0 percent, or exactly double the 1.5 percent gain posted nationwide.

Florida’s Economy Is Firing on Nearly All Cylinders

Florida has done a very good job of diversifying the state’s economic base and making the state less dependent upon tourism. The technology and aerospace industries are two notable successes. Employment in professional & technical services has risen 3.2 percent over the past year, while employment in the aerospace sector has risen 4.9 percent. Growth in the aerospace industry is particularly evident along the Space Coast, Jacksonville and in South Florida. Overall manufacturing employment has risen 3.7 percent over the past year, with much of that growth coming in the higher paying durable goods sector. In addition to adding lots of higher skilled positions, Florida also continues to add lots of entry level jobs, which is something not evident in many other states. Employment in administrative services has risen 3.4 percent over the past year, creating 21,800 net new jobs.

Florida’s relative abundance of job opportunities is pulling job seekers in from other parts of the country. Florida’s labor force has risen 3.5 percent over the past year. Employment has risen even faster, however, allowing the unemployment rate to fall 0.1 percentage point to 4.8 percent. 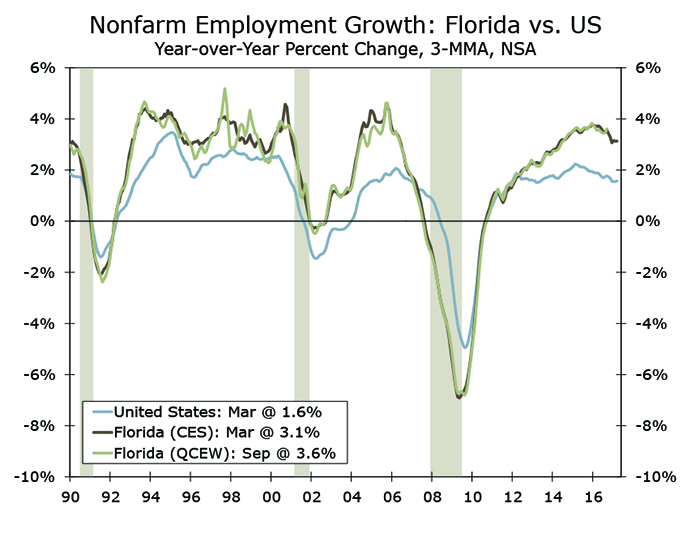 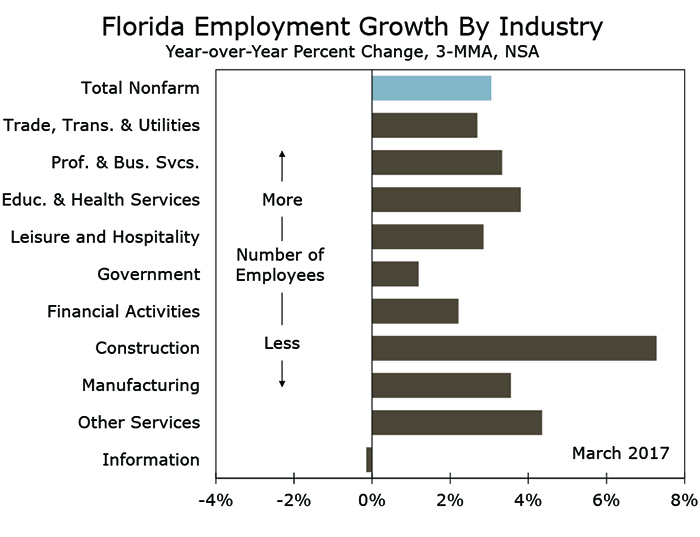 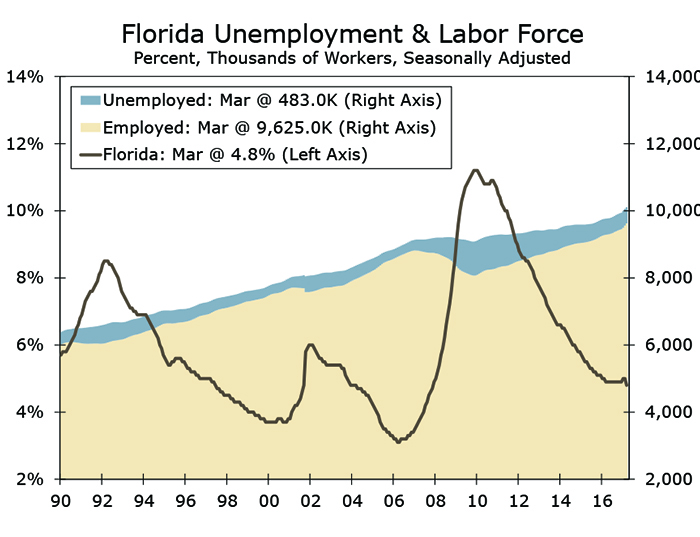