Ending 2012 on a solid note, housing starts rose a more-than-expected 12.1 percent in December to a 954,000-unit pace, the fastest rate in four years. Single-family starts rose 8.1 percent to a 616,000-unit pace in December and are up 18.5 percent over the past year. The volatile multifamily component increased a solid 20.3 percent. Starts rose in every region. Starts were revised generally lower in November, but the overall report is somewhat too good to be true. We suspect some of the surge is likely seasonal noise, but it is also plausible that builders were trying to get ahead of higher permitting fees and other new regulations 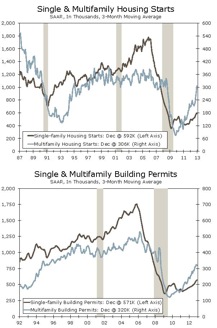 scheduled to take place in the beginning of 2013. While the bump in starts appears a bit exaggerated, the trend is still upward. Starts finished the year 37 percent higher than its year-ago pace and are expected to be even stronger in 2013.

One sign pointing to continued momentum in housing construction in 2013 is permits. Housing permits rose 0.3 percent in December to a 903,000-unit pace. Single-family permits are up roughly 27 percent on a year-ago basis suggesting it will likely be a bright spot during the year with overall growth heavily weighted toward single-family homes. Multifamily permits fell 2.1 percent on the month and have been down two of the past three months. Demand for apartments is showing little signs of abating, but construction pipelines are fairly robust in select markets.

Another bright spot to watch is builder sentiment. The latest NAHB/Wells Fargo Home Builders survey was unchanged in January at 47, the highest level since 2006. The strength in builder sentiment continues to reflect gains in sales and buyer traffic. So why are builders optimistic?

The improvement in builder optimism is largely due to continued gains in prices and historically low inventories. While the share of foreclosures remains elevated, competition from foreclosures has lessened considerably over the past year as properties in the best condition have already been sold.

The Outlook for Housing Starts

We expect starts will increase to a sustainable pace of roughly 990,000-units in 2013 with much of the gains in single-family. Despite some monthly volatility, all price measures are improving which should encourage more single-family activity as the labor market continues to strengthen. With single-family gaining solid footing, multifamily will likely begin to stabilize. We believe the trend toward multifamily housing will continue, but starts should see a peak in the next few years. That said, the housing market will likely continue to be a bright spot for the U.S. economy over 2013