Housing starts tumbled 18.7 percent in November, which was larger than consensus estimates. The prior month’s gain was revised higher, however, and permits held up reasonably well. Much of the volatility in starts has been in the multi-sector, which saw starts surge 76 percent in October and fall back 45.1 percent in November. The past 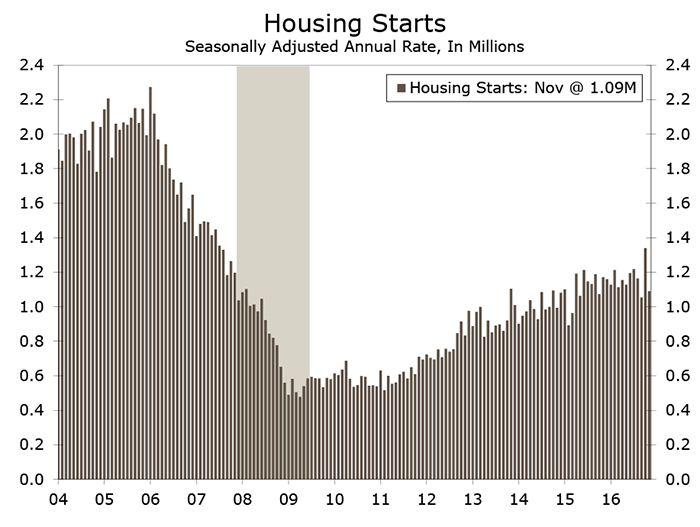 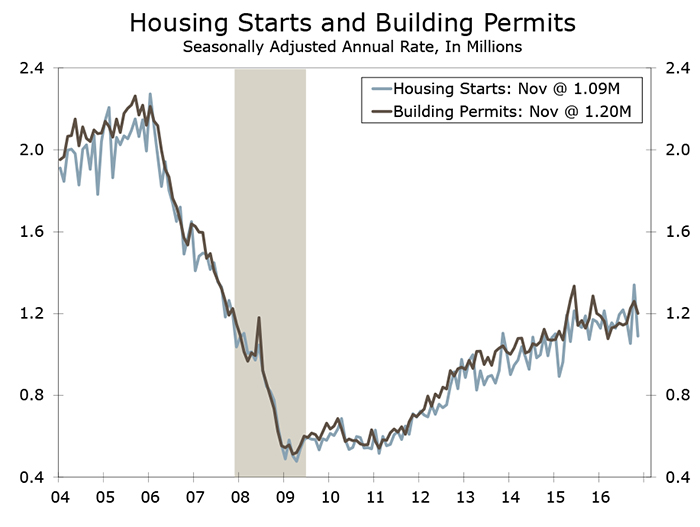 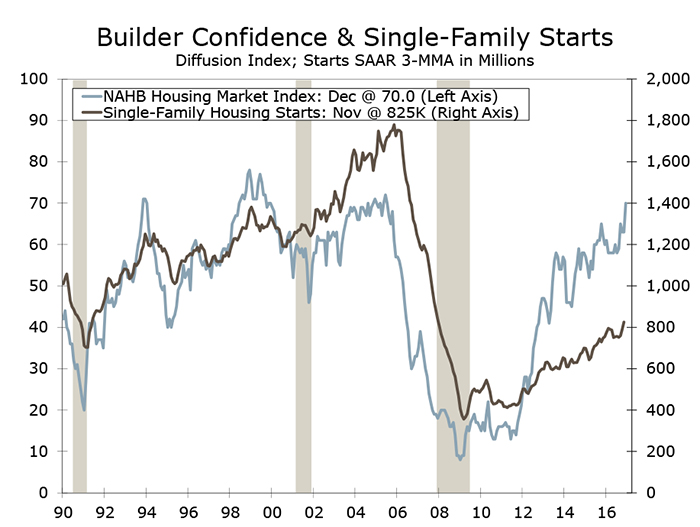 three months have been unusually volatile for multifamily starts. Permits have not moved around nearly as much.

Unseasonably mild weather also likely played a role in October’s stronger housing numbers and November’s apparent payback. Homebuilding normally declines in the fall as the holidays approach and temperatures turn cooler. This year’s unseasonably mild fall weather, which led to a plunge in utility use, allowed work to begin on more single-family homes than usual in October, which caused the seasonally adjusted starts number to surge 10.5 that month. On a non-seasonally adjusted basis, single-family starts rose just 7.9 percent.

The expectation of rising interest rates may have also been a factor in October’s surge in new construction. Apartment developers likely rushed to 2.0 lock in financing before the presidential election and many home buyers likely signed purchase contracts and locked in mortgage rates ahead of the 1.6 Fed’s widely anticipated hike in the federal funds rate that finally took place this past week.

With demand pulled forward, starts were primed for a fall in November. Overall starts fell 4.1 percent during the month and starts of projects with 5 units or more tumbled 43.9 percent. With building activity now in its 0.8 seasonally slow period, we feel the year-to-date data provide best measure of new home construction. Overall housing starts are running 4.8 percent 0.4 ahead of their year ago pace, while single-family starts are up 9.6 percent. Year-to-date multifamily starts are down 3.8 percent. All are close to our forecast for 2016, published in our monthly housing report.

Housing permits fell 4.7 percent in November to a still solid 1.201-million unit pace. Overall permits are running slightly below their trailing three-month average but are still 10.2 percent higher that starts. The entire gap is in multifamily units, where the three-month moving average of starts is running a staggering 72.4 percent below the three month average of permits. Some rebound in multifamily starts is likely in coming months. Single-family starts are in the opposite position, with starts running ahead of permits, both for the month of November and on a three-month moving average basis. The net result is that single-family starts are likely to fall off in coming months, despite yesterday’s surge in homebuilder confidence.