After a blowout report in March, starts plunged 16.5 percent in April, with both single- and multifamily starts tumbling. Permits rose sharply, however, and builders sound downright giddy about sales prospects.

 April’s 16.5 percent plunge in housing starts is less alarming when paired with the 14.3 percent rise in permits reported that month. Inclement weather likely delayed some starts, which should produce a nice rebound in May.

Starts Tumbled Back Below Permits

 Single-family starts fell 2.1 percent in April, marking the second consecutive monthly drop. Starts had been running ahead of permits, however, so the drop was not a surprise. Permits for single-family homes rose 3.0 percent to a 617,000-unit pace.

 Builder confidence improved in May and the tone of recent builder conferences has been downright giddy. Demand is improving but lots, labor and materials are in short supply. 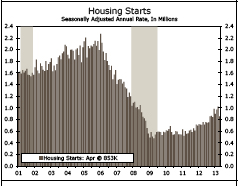 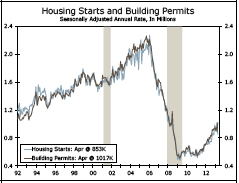 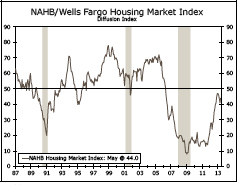 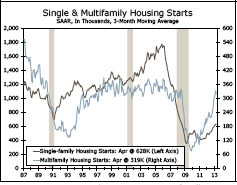