Infrastructure spending is widely known to boost economic activity. However, the fiscal multiplier tends to be much larger during recessions, suggesting the late-cycle lift could be less than originally anticipated.

President-elect Donald Trump has proposed an infrastructure program of $1 trillion over the next 10 years (the Trump transition website notes $550 billion.) The American Society of Civil 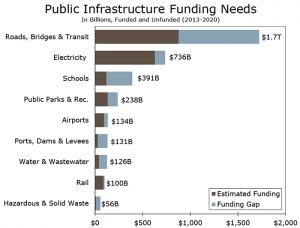 Engineers (ASCE) reports that the nation’s infrastructure is in “poor” condition and would require an estimated $3.6 trillion by 2020 to maintain a state of “good” repair, with only about half the needed funds committed (top chart).

Although details of the infrastructure program have yet to be published, two of Trump’s advisers provided a proposal in October (Ross, Wilbur and Navarro, Peter, “Trump Versus Clinton on Infrastructure,” Oct. 27, 2016). The plan includes $167 billion in equity investment, which is almost 17 percent of the total package. The equity portion would be supported by a tax credit equal to 82 percent of the equity. The remainder of the plan would be financed by debt. Based on the structure, critics of the plan suggest that investors will have little “skin in the game.” There is also recent talk about an infrastructure bank, which was included in the

While we await the details, discussion has also been centered on the impact to overall economic growth. Academic research finds that infrastructure spending, especially highway funding, has a positive effect on real GDP growth, which can be seen in the first two years and then a larger second- round effect after six to eight years (Leduc and Wilson, 2012). In fact, based on Congressional Budget Office (CBO) estimates, the multiplier for infrastructure spending for the American Recovery 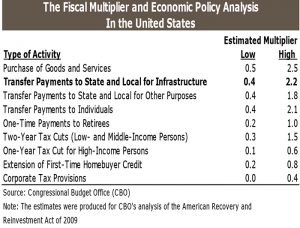 and Reinvestment Act was larger than most other forms of government spending (middle chart). Literature also highlights the correlation between infrastructure spending and productivity growth in the U.S. and suggests that periods of weak public investment explains a good portion of the slow productivity growth (Aschauer, 1988) (bottom chart). These anticipated results are very promising, especially given slow productivity growth and low growth in potential output. However, the direct effect of infrastructure spending will be subject to long lags and will depend on the size of the fiscal multiplier.

A fiscal multiplier is the ratio of how much economic activity will increase for a unit of government spending. Studies show a wide array of multipliers based on a host of factors, with values ranging from 0.5 to 3.5 (Whalen and Reichling, 2015). The multiplier can also vary over the cycle. Research estimates a peak multiplier of 2.5 during recessions and 0.6 in expansions, with the gap due to stimulus crowding out private spending during multiplier for infrastructure spending is slightly less than two over a 10 year period (Leduc and Wilson, 2012), suggesting a $1.00 increase in spending raises output by roughly $2.00. That said, the infrastructure multiplier may be smaller during an expansion. 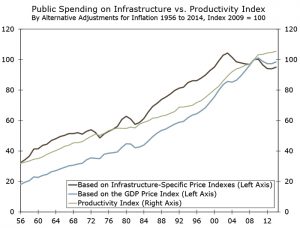