Employment rose 288,000 in April with gains broad-based across the private sector. The unemployment rate plummeted to 6.3 percent, but came amid another drop in the labor force. Hourly wages were flat. Broad-Based Job Gains Suggest Sustained Growth

After several months of weak job numbers, the April gain of 288,000 jobs on top of a net upward revision in prior months of the year is reassuring that the labor market continues to improve and that economic growth should pick up. April job growth was broad-based, with the largest gains in professional & business services, accommodation & food services, retail trade and education & health, all of which are up over the past year (top graph). Manufacturing payrolls rose by 12,000 jobs and have risen on average by 13,000 jobs over the prior three months, so industrial production should improve in the second quarter. The index of aggregate hours worked in the economy rose 2.3 percent over the prior three months, which supports our outlook for GDP growth of 2.5-3.0 percent in the second quarter. Weakness persisted in the federal government sector, but local government hiring continued to improve.

The unemployment rate fell sharply to 6.3 percent in March, the lowest rate since September 2008. While a significant improvement on the surface, the drop continues to overstate the rate of improvement in the labor market. By the Fed’s broader view of labor market indicators, other measures continue to show a significant amount of slack. The labor force participation rate fell to 62.8 percent over the month, more than reversing last month’s rebound. The drop may be related to the end of selected extended unemployment benefit programs. Employment measured by the more volatile household survey fell in April, and the number of long-term unemployed workers declined by 287,000 during the month, suggestive of a labor force exit. Controlling for labor force flows, the employment-population ratio was unchanged at 58.9 percent. The number of workers marginally attached to the labor force remained unchanged in April, while part-time workers seeking full-time work ticked up to 7.5 million in April.

That said, the household survey continues to paint a picture of a labor market improving on trend. Despite declining in April, household employment is up by 2.0 million over the past year. The number of workers employed full-time has risen 2.3 million while the number of part-time workers has fallen.

The surge in hiring in April bodes well for overall income gains. Aggregate hours worked rose 0.3 percent and should support continued growth in consumer spending. However, wage growth on an individual basis remains depressed. Average hourly earnings were flat in April and are now up only 1.9 percent over a year ago. 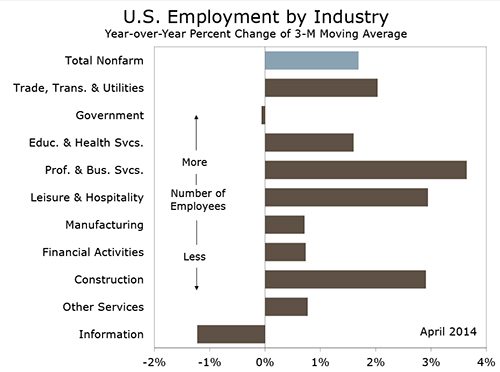 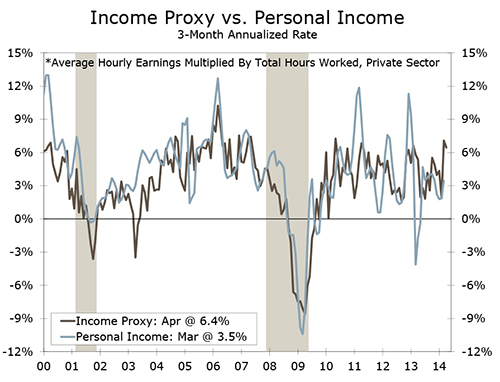 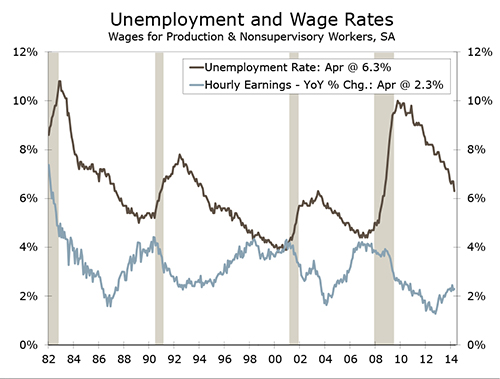