We suspect that rain was a key factor in recent weakness, which means that starts will be more impacted than permits. Indeed, single-family permits increased 0.6 percent, which is the third straight monthly gain. Another important point to make is that the level of permits is running ahead of starts, which suggests a ramp-up in activity is in the cards. Moreover, single-family units under construction show a more steady progression and have increased since the beginning of the year. Single-family units under construction are up 19.8 percent over the past year and increased 1.6 percent in June. Multifamily units under construction are up 38.2 percent on a year-ago basis, which also speak to continued strength in this sector.Housing starts fell 9.9 percent in June, with the decline concentrated in the multifamily component. On a regional basis, single-family starts fell in the South, where rain was likely a factor.

Housing starts fell unexpectedly in June to an 836,000-unit pace. While weakness was broad-based, much of the decline was in the volatile multifamily component, which fell 26.2 percent. Despite the monthly weakness, multifamily construction continues to be a boon for the economy, as renters shut out of the housing market due to tight lending standards continue to boost demand. In fact, multifamily starts are up 7.9 percent over the past year. Gains in apartment demand continue to be driven by the echo boomer generation and are expected to remain steady as many face extraordinary student loan debt. Moreover, the decline in multifamily appears to be a payback for the 28.2 percent jump in May. While the decline in multifamily in June is likely due to statistical noise, attention will be focused on the drop in single-family, which will raise questions whether the recovery remains sustainable.

Single-Family Decline is Much Ado About Nothing

Single-family starts fell 0.8 percent on the month, which is the third decline in four months. The decline seems to be at odds with recently reported builder sentiment. According to the Wells Fargo/ NAHB Builders’ Survey, builder confidence jumped 6 points in July, which is the third consecutive monthly increase. The increase brought the index to its highest level since January 2006. Builders are optimistic about present and future sales and buyer traffic continues to pick up. So, what is the disconnect in monthly data for sentiment versus starts?

We expect housing starts to increase to a sustainable pace of 990,000-units in 2013, with much of the gain in single-family. With single-family gaining solid footing, multifamily will begin to stabilize. We believe the trend in multifamily will continue, but starts should peak in the coming years. That said, real residential construction spending will continue to add to real GDP growth. 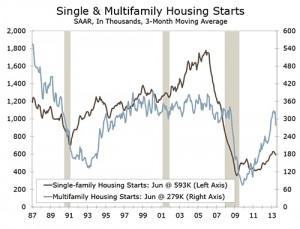 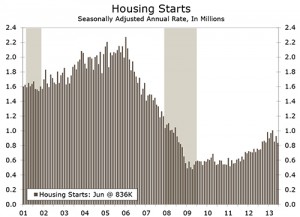 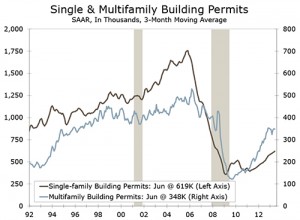