There is more than an abundance of information on getting ready for winter with an eye on managing survival through these challenging months but there is little information available on what challenges you can expect.

I came across a 2018/2019-winter forecast from a source that looks at the season from a totally different vantage point. They love snow. They love the cold. They love winter. Based on this I figured that their forecast would probably be more accurate than most.

“It’s time for one last winter weather forecast before we buckle down and see what Mother Nature throws our way first hand. But, don’t fret as we have saved the best for last; where the NOAA and Old Farmer’s Almanac forecasted a bleak winter of warmer temperatures and less precipitation, the Farmer’s Almanac has a different outlook, “teeth-chattering cold ahead.” 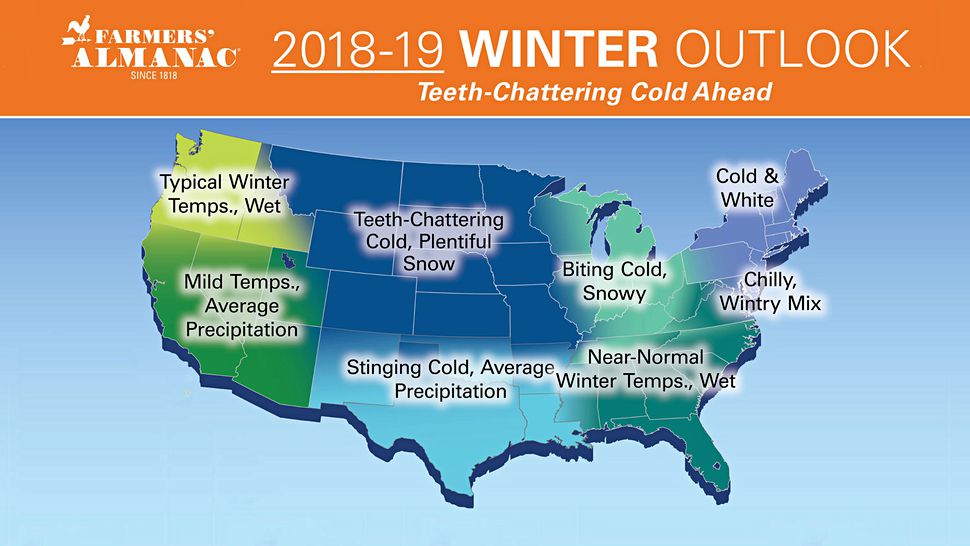 “Unlike the Old Farmer’s Almanac that makes weather predictions through a combination of animal signals, chicken bones, pig spleens and other weather lore, (onion and potato skins were my mother’s favorite), the Farmer’s Almanac bases their outlook on a “mathematical and astronomical formula” that dates back to the 1800’s and takes sunspot activity and other astronomical anomalies into account. In fact, the formula is so confidential that only Mr. Caleb Weatherbee, the Farmer’s Almanac’s weather prognosticator, knows it in entirety.”

“According to Mr. Weatherbee, winter 2018-2019 will be colder than average from the Continental Divide east through the Appalachians, while the only near-normal winter weather is predicted to be in areas west of the Rockies, the mid-Atlantic States, and the Southeast.

“Those in the Great Lakes, and the Midwest through New England can rejoice, as colder than average temperatures combined with above average precipitation make for an exceptionally snowy winter, particularly throughout January and February. However, Mr. Weatherbee is also calling for an exceptionally snowy winter for those across the Pacific Northwest and the mid-Atlantic States, where temperatures aren’t expected to get as blistering cold, but will still drop low enough to ensure increased levels of snowfall.”

“In addition to the broader prediction of colder weather across the board, Mr. Weatherbee has also red-flagged a handful of particular winter storm incidents that are expected to be key points in the coming season. To begin, the mid-Atlantic through New England can expect a deep holiday season, with December 1st-3rd, 16th-19th, and 28th-31st bringing big storm systems followed by gusty winds. Other red-flagged periods include a mid-February arctic cold front expected to come down from Canada and stretch across the entire eastern seaboard, and a mid-March weather system expected to deliver increased snowfall from coast to coast, in particular, throughout New England from March 20th-23rd.

“In addition to an exceptionally cold winter with increased snowfall, Mr. Weatherbee is also calling for a longer than average winter season. The red-flagged nation-wide storm system in March will be followed up by another cold front coming down from the Arctic that will delay spring from settling in until mid-April.”

While we’re not, “hoping for the latter” this does or should give us guidelines on what we need to do to be ready for winter – ALL THAT WE CAN! The only thing you can count on about winter weather forecasting is that it’s never right and it’s never wrong.