“The construction industry suffered an enormous loss in jobs. However, it is quite likely that winter weather played a substantial role.” —ABC Chief Economist Anirban Basu.

Despite a slight decrease in the national unemployment rate, job losses continue to mount in the construction industry as the unemployment rate rose to 22.5 percent in January, according to the Feb. 4 employment report by the U.S. Labor Department. Year-over-year, the industry has lost 130,000 jobs, or 2.3 percent of preexisting totals. Today’s numbers are up from 20.7 percent in December, but down from 24.7 percent one year ago. 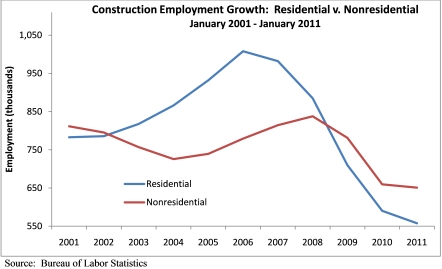 Heavy and civil engineering construction employment fell by 7,000 jobs in January and has lost 22,400 jobs in the last two months. But employment in that sector is up by 12,900, or 1.6 percent, compared to January 2010 levels.

The specialty trade contractor sector lost jobs for the third straight month, down 14,900 in January, and has lost 102,000 jobs or 2.9 percent over the last 12 months.

Overall, the nation gained 36,000 jobs in January as private sector employment grew by 50,000 jobs and the public sector lost 14,000 jobs. Year-over-year, the nation has added 984,000 jobs, or 0.8 percent. The national unemployment rate dropped from 9.4 percent last December to 9 percent in January, the lowest level since April 2009.

“Today’s employment release is simply baffling,” said Associated Builders and Contractors Chief Economist Anirban Basu. “Some may find comfort in the fact that for a second consecutive month, national unemployment dipped by 0.4 percentage points. Over the past two months, U.S. unemployment has declined from 9.8 percent to 9 percent. Many economists came into 2011 thinking that the U.S. unemployment rate would end the year still above 9 percent.

“But, a deeper dive into the data reveals some peculiarities. Rather than entering the labor force in larger numbers to take advantage of expanding economic activities, many Americans are leaving the labor force,” said Basu. “In December, the U.S. labor force shrunk by 260,000 people. Last month, the decline in labor force participants was 504,000 jobs. In other words, unemployment is largely declining for the wrong reasons.

“What’s even more difficult to comprehend is that the establishment survey data indicate that job growth remains remarkably suppressed. The consensus estimate for job creation in January was more than 140,000, but the number came in at just 36,000. Normally, that level of job creation would be associated with rising unemployment,” Basu said.

“To add to the puzzle, the construction industry suffered an enormous loss in jobs. However, it is quite likely that winter weather played a substantial role, and at least one prominent U.S. economist believes that the lack of hiring in construction in January is associated with pent-up demand for labor, which implies that February could be far better,” said Basu.

“One of the more disappointing aspects of the report was the continued loss of jobs in heavy and civil engineering. It is not clear how weather-sensitive this sector is, but the segment had been a job creator until very recently,” Basu said. “Engineering employment often serves as a leading indicator of future construction employment, and the recent two-month downturn in this segment is not particularly promising.”