“The nonresidential construction segment of the industry remains stubbornly resistant to improvement due to a combination of high vacancy rates and cautious lending.” —ABC Chief Economist Anirban Basu.

Hardest hit was the nonresidential building construction sector which lost 2,000 jobs in February, but is up by 3,500 jobs year-over-year as employment in that sector stands at 654,100 jobs. 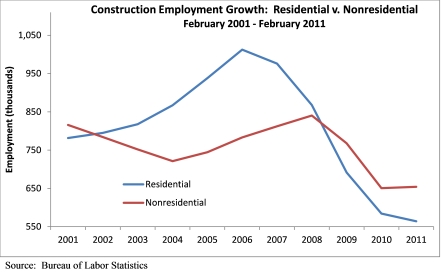 Heavy and civil engineering construction gained 4,500 jobs in February and 26,600 jobs, or 3.3 percent, over the last twelve months. The specialty trade contractor sector added 16,700 jobs for the month and 11,500 jobs, or 0.6 percent, year-over-year. This represents the first year-over-year increase for the sector since June 2008. Residential building construction employment increased by 2,200 jobs in February, but is still down by 20,000 jobs, or 3.4 percent, from the same time last year.

“It turns out it really was the weather,” said Associated Builders and Contractors Chief Economist Anirban Basu. “The U.S. construction sectors added 33,000 jobs in February, and this number was likely enhanced by the buildup in demand for labor in January.

“Unfortunately, nonresidential building construction continued to shed jobs, losing 2,000 for the month. This segment of the construction industry remains stubbornly resistant to improvement due to a combination of high vacancy rates and cautious lending,” said Basu.

“While the situation is likely to improve going forward, particularly as the balance of the nation’s economy gathers momentum, there is little reason to believe conditions will improve markedly in 2011,” Basu said.

“Still, overall construction employment totals should pick up gradually over the course of the year. But it’s clear that cold weather and snow had served to interrupt the momentum that had been building over the past six months,” said Basu.