“The slowdown in investment in structures is associated with the soft patch of economic growth that characterized much of last year.” —ABC Chief Economist Anirban Basu. 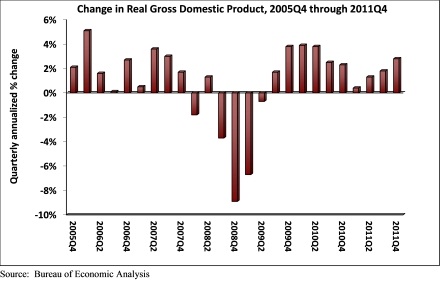 Nonresidential fixed investment increased 1.7 percent in the fourth quarter of 2011 following a revised 15.7 percent increase in the previous quarter according to the Jan. 27 Gross Domestic Product (GDP) report by the Department of Commerce.

Residential fixed investment jumped 10.9 percent in the fourth quarter of 2011 after a 1.3 percent increase in the third quarter.

Gross domestic purchases – purchases by U.S. residents of goods and services wherever produced – increased 2.8 percent in the fourth quarter following an increase of 1.3 percent in the third quarter.

“The fourth quarter of 2011 was a disappointing one for nonresidential construction structures,” said Associated Builders and Contractors Chief Economist Anirban Basu. “Investment in structures had blossomed during the two previous quarters, expanding 22.6 percent in the second quarter and 14.4 percent in the third quarter. The fourth quarter represented a reversal with investment dipping 7.2 percent.

“While this may be attributable to seasonal factors and not particularly worrisome, another theory is that the slowdown in investment in structures is associated with the soft patch of economic growth that characterized much of last year,” Basu said. “Investment in structures tends to be a lagging economic indicator, which means that the slowdown in economic growth during the first half of last year would be reflected in subsequent data characterizing nonresidential investment.

“Overall, most people will focus on the GDP’s disappointing headline number,” said Basu. “The consensus forecast was for 3 percent growth on an annualized basis during last year’s fourth quarter. While 2.8 percent growth is in the immediate vicinity, the marketplace was certainly hoping for better because the fourth quarter of 2011 was the year’s best, as well as the best performing quarter since the second quarter of 2010.

“It is likely that the consensus forecast would have not been so optimistic had forecasters understood how substantially government outlays have been falling,” Basu said. “State government spending declined for a sixth consecutive quarter, and federal government outlays fell 3 percent for the quarter, adding to the economic malaise that is facing the country.”