String Of Recent Gains Is Over For Now

Associated Builders and Contractors (ABC) today released its Construction Backlog Indicator (CBI) for the third quarter of 2011. At 8.1 months, the third quarter CBI remained unchanged from the previous quarter, but was up 16.3 percent from a year ago. CBI is a forward-looking economic indicator that measures the amount of construction work under contract to be completed in the future.

“The lack of increase in the CBI last quarter appears to be a symptom of the soft patch in economic momentum experienced in the middle of this year, as well as the ongoing and elevated level of uncertainty regarding Europe, financial markets and other aspects of economic life,” said ABC Chief Economist Anirban Basu.

“The implication of the most recent CBI data is that momentum in the U.S. nonresidential construction industry is in the process of stalling,” said Basu. “The question remains: Will the nation’s commercial and industrial construction industries face a long-term slump or become reinvigorated in the new year?” 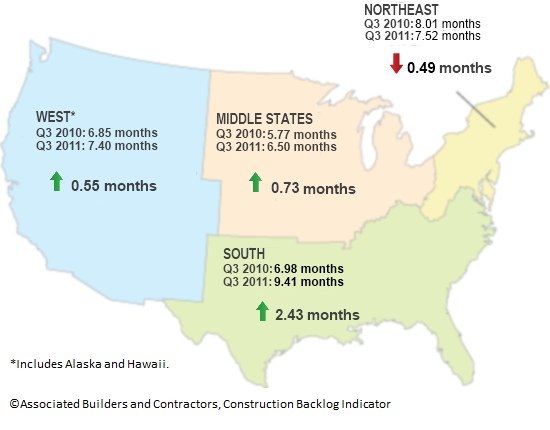 “One of the casualties of the economic soft patch was the level of growth in industrial production,” said Basu. “This appears to have disproportionately impacted the Middle States region, which includes heavily industrial communities in Michigan, Ohio and Indiana. As a result, the relatively swift level of progress in renewed construction backlog experienced since the third quarter of 2010 in the Middle States has been at least temporarily halted.

“In contrast, even during the first half of the year when U.S. economic growth averaged less than 1 percent on an annualized basis, investment in the South – including in energy- and power-related industries in Texas, Oklahoma, and elsewhere in the region – continued to be brisk. Therefore, construction backlog in the South remains elevated relative to the balance of the nation and that is unlikely to change.”

“In the commercial and industrial category, construction backlog is up 24 percent from the same time last year, a reflection of the rebound in consumer spending and general economic activity,” Basu said. “Both anecdotal and survey data indicate lending conditions have become somewhat easier in the third quarter, which is consistent with a higher level of commercial construction starts.”

“It should be noted that well-placed, larger firms continue to enjoy the most predictable deal flow,” said Basu. “Many of these larger firms are involved in the energy and power category, which has expanded faster in terms of construction spending during the past year than any other nonresidential construction segment. In contrast, the loss of construction backlog among smaller firms is consistent with recent data indicating many specialty trade contractors are now reducing staffing levels.”