Associated Builders and Contractors (ABC) today reports its Construction Backlog Indicator (CBI) rose 4.3 percent in the second quarter of 2012 after declining the two previous quarters. Despite the quarterly expansion, CBI is 0.3 months, or 4.2 percent below the second quarter of 2011. CBI is a forward-looking economic indicator that measures the amount of construction work under contract to be completed in the future.

“Unfortunately, any improvement in nonresidential construction activity is likely to remain modest given the ongoing uncertainty regarding America’s fiscal cliff—a number of tax increases and spending cuts that take effect at the end of the year—as well as European sovereign debt issues and increasingly volatile energy prices,” Basu said. “While there is pent-up demand for new construction in the power, manufacturing and infrastructure segments, the level of economic and political uncertainty remains far too elevated to permit more aggressive nonresidential construction spending recovery in the near term.”

“The South continues to lead the way in construction backlog, due to commodity related production, including food processing, oil and natural gas, as well as substantial investment in manufacturing plants and equipment,” said Basu. “However, average backlog has declined for three consecutive quarters in the South, which may be due to a bit of a slowdown in energy-related investment because of the low price of natural gas.

“In contrast, the West has experienced increasing backlog for two consecutive quarters and arguably enjoys more forward momentum than any of the four regions monitored by ABC,” Basu said. “California’s innovation economy, Washington’s active aerospace and technology industries and Arizona’s overall economic improvement are creating new opportunities for contractors, both directly and indirectly.” 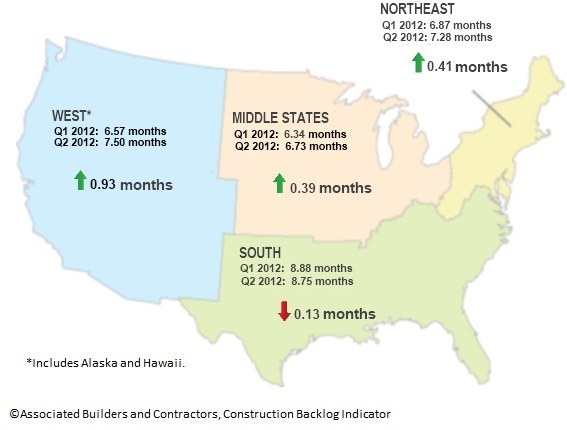 “Both the infrastructure and the heavy industrial categories experienced meaningful and significant increases in construction backlog during the second quarter,” said Basu. “From a macroeconomic perspective, there is significant demand for more competitive infrastructure and for American alternatives to foreign-manufactured goods. The re-shoring of production to the United States appears to be creating new opportunities for construction workers, particularly in the South.

“Progress in the commercial and institutional category may be a bit slower in the near future,” Basu said. “Spending continues to be hamstrung by a combination of weak investment returns and cautious financiers; however the CBI data indicates gradual increases in construction spending in this sector in the coming months.”

“For several quarters, much of the improvement in backlog had been among smaller firms,” said Basu. “However, much of the expansion in the second quarter occurred among larger firms as a result of improved construction spending dynamics in the infrastructure and heavy industry categories.