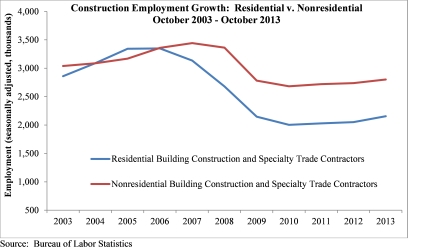 Since October 2012, the construction industry added 185,000 jobs (3.3 percent). Of that total, 35 percent is attributable to nonresidential activities, down from 37 percent in September 2013. “It is encouraging to see nonresidential employment continue to rebound,” said Associated Builders and Contractors Chief Economist Anirban Basu. “Every major segment of nonresidential construction exhibited job growth for a second consecutive month, a positive indication after the sector posted consecutive losses for the five previous months.”

Across all industries, the nation added 204,000 jobs, making October the second strongest month for job growth this year. The private sector expanded by 212,000 jobs. The public sector lost 8,000 jobs. According to the Bureau of Labor Statistics’ household survey, the national unemployment rate rose to 7.3 percent in October, up slightly from 7.2 percent in September, though down from 7.9 percent in October 2012. The labor force participation rate dipped to 62.8 percent, due in part to the recent federal government shutdown. Labor force participation sunk to its lowest level since March 1978.

“While the establishment survey registered higher than expected growth in October, the Current Population Survey captured the impacts of the government shutdown. However, the decline in labor force participation in October appears to be related to more than just the shutdown, indicating that an elevated proportion of Americans continues to be removed from the nation’s labor force,” said Basu.

“In addition to problematic labor force dynamics, the quality of job augmentation continues to be modest,” said Basu. “For instance, leisure and hospitality and retail trade, two low-wage sectors, added 53,000 and 44,000 jobs, respectively. These two segments accounted for nearly half of October’s job growth. Add in temporary staffing agencies and home health, and the share of jobs added in these low-wage segments rises almost exactly 50 percent.”

Only one major segment of construction employment lost jobs: Residential specialty trade contractors lost 6,600 jobs in October after losing 15,800 jobs in September. However, the segment is up by 78,500 jobs compared to October 2012.