“The employment expansion in nonresidential construction is, at least in part, a reflection of the way the economy finished last year, which was on a relative strong note.” —ABC Chief Economist Anirban Basu. 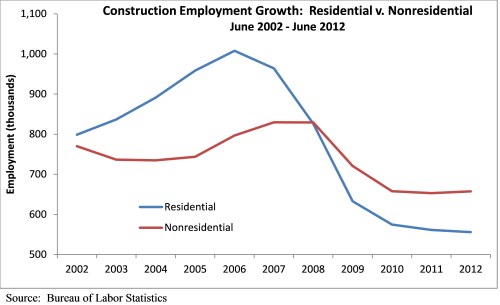 Residential building construction employment slipped by 5,900 jobs last month and is down by 5,200 jobs compared to a year ago. Employment in this sector now stands at 556,600.

Overall, the nation added 80,000 jobs in June and 1.8 million jobs during the past twelve months. The private sector added 84,000 jobs, while the government sector lost 4,000 jobs. June represents the 28th consecutive month of private sector job growth in the United States. However, the unemployment rate remained unchanged for the month at 8.2 percent, down from 9.1 percent in June 2011.

“Today’s employment report is a bit of good news for the construction industry, but is widely viewed as disappointing,” said Associated Builders and Contractors Chief Economist Anirban Basu. “During the first three months of this year, the nation added 226,000 monthly jobs on average. During the past three months, the average monthly gain has been just 75,000 jobs.

“Many economic forecasters expect sluggish job growth during the balance of the summer and into the fall due to ongoing global economic slowing and various sources of uncertainty in the United States, including issues with respect to federal tax and budgetary policy,” Basu said.

“The employment expansion in nonresidential construction is, at least in part, a reflection of the way the economy finished last year, which was on a relative strong note,” said Basu. “Fourth quarter 2011 GDP growth was 3 percent.

“The associated increase in investor/developer confidence likely pushed many projects ahead, which helps explain the 10,000 increase in jobs among specialty trades contractors in June,” Basu said. “The economy today is likely expanding at less than 2 percent, consistent with expectations of flat nonresidential construction spending and suppressed hiring over the near-term.

“Given recent progress in Europe regarding sovereign debt and banking issues, as well as some recent signs of legislative progress in the United States, the level of economic uncertainty may abate somewhat over the near-term,” said Basu. “That would help reignite nonresidential construction’s recovery, though improvement in industry fortunes is unlikely to be immediate.”