Construction materials prices rose only 0.3 percent in August and are up 1.4 percent year over year, according to the Sept. 13 Producer Price Index release by the Department of Labor. In addition, nonresidential construction materials increased 0.5 percent for the month and are 1.2 percent higher than one year ago.

“In a world characterized by additional looming warfare, fluctuating global currencies, rising U.S. interest rates and plunging gold prices, one would expect much more volatility in materials prices,” said Associated Builders and Contractors Chief Economist Anirban Basu. “Despite all of those shifting factors, construction materials prices remain remarkably stable, which is noteworthy given the price volatility experienced in 2004 and 2008. 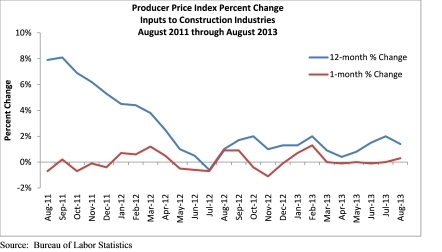 “The outlook for the global economy is now improving,” Basu said. “Europe has exited its recession, and growth in China appears to be firming. The consensus 2014 forecast for the United States also calls for more rapid growth, implying that the pace of materials price increases is likely to accelerate.

“That said, relative stability in month-to-month prices may continue,” Basu said. “It is worth noting that the monthly change in prices was less than 1 percent in absolute value for many categories, including iron and steel, concrete products and steel mill products.”

A number of key construction inputs did not experience price increases for the month.