“The expectation is that the demand for commodities will not be quite as brisk from this point forward.” —ABC Chief Economist Anirban Basu. 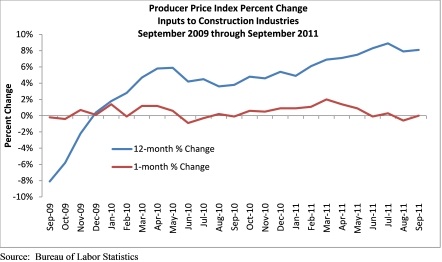 Generally, metal prices trended downward for the month. Nonferrous wire and cable prices dropped 3.5 percent in September and were down 0.8 percent for the third quarter. However, prices were still up 9.3 percent year-over-year. Steel mill product prices slipped 0.6 percent last month, 1 percent lower for the quarter, but are still 13.5 percent higher from one year ago. Similarly, iron and steel prices were down 0.1 percent for the month, down 0.2 percent for the quarter, but up 13.8 percent over the past twelve months.

However, not all metal product prices were down for the month. Fabricated structural metal product prices were unchanged in September and the quarter, but are 5.2 percent higher from September 2010. Prices for plumbing fixtures and fittings inched up 0.1 percent on a monthly basis, up 0.5 percent for the quarter, and 2.8 percent higher from one year ago.

“Despite today’s report, there is no reason to believe that construction materials prices will generally decline during the months ahead, even if the global economy continues to soften,” said Associated Builders and Contractors Chief Economist Anirban Basu.

“A weak worldwide economy would represent a problem for many asset classes, including sovereign debt and equities,” Basu said. “If investors begin to sell those assets on net, proceeds from those sales could end up in hard assets like commodities, thereby preventing construction materials price declines.

“For now, commodity investors appear heavily focused on the ongoing slowdown in global growth,” said Basu. “The economic issues in Europe are now well known and have been thoroughly discussed, but China and other emerging nations are also experiencing their own set of economic problems.

“In short, the expectation is that the demand for commodities will not be quite as brisk from this point forward,” Basu said. “Therefore, it is likely that materials prices are no longer on the rise.