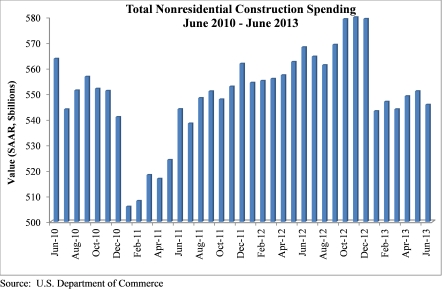 Indicating that the nation’s builders continue to struggle in the current economic environment, construction spending—which includes both nonresidential and residential sectors—was down 0.6 percent in June, according to the August 1 Construction Spending report by the U.S. Census Bureau. However, spending was 3.3 percent higher than one year ago.

Nonresidential construction spending fell 1 percent in June and declined 4 percent during the past 12 months, with spending totaling $545.8 billion on a seasonally adjusted, annualized basis.

Ten of 16 construction sectors posted spending losses for the month, with the largest decreases in conservation and development, down 9.4 percent; religious, down 6.8 percent; water supply, down 5.5 percent; sewage and waste disposal, down 5.3 percent; and commercial, down 5.1 percent. On a year-over-year basis, construction spending has softened in 12 subsectors. The largest losses occurred in conservation and development, down 17.2 percent; communication, down 13.8 percent; educational, down 12.6 percent; highway and street, down 12.4 percent; and religious, down 12.2 percent.

Residential construction spending slipped 0.1 percent for the month, but is 17.6 percent higher than the same time last year.

“Despite that, nonresidential construction and most of its sub-components are associated with stagnant spending or worse,” Basu added. “A majority of nonresidential segments experienced declining activity in June, which often represents a period of accelerating, not decelerating, activity.

“However, the recent bankruptcy of Detroit will likely translate into conservative budgeting during the months ahead as financiers and policymakers adopt an even more cautious stance regarding major capital outlays,” Basu said.

“Construction segments heavily financed by the private sector, including commercial and lodging-related construction, were down for the month, and office-related construction spending was up only slightly,” said Basu. “The implication is that the pace of economic growth, which averaged less than 2 percent on an annualized basis during the first half of 2013, has not been enough to trigger or sustain meaningful private nonresidential construction increases.

“The conventional wisdom is that the second half of the year will be better for the broader economy, which would imply better nonresidential construction performance in 2014,” Basu said. “However, with interest rates now rising, there are reasons for contractors and other stakeholders to remain cautious.”