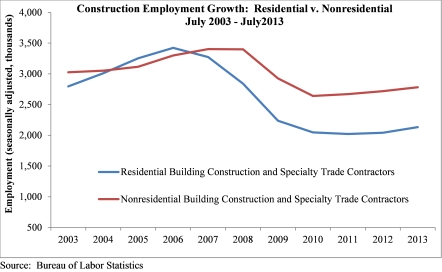 Despite the loss of 6,000 jobs, the nation’s construction industry unemployment rate dipped to 9.1 percent in July on a non-seasonally adjusted rate, according to the U.S. Labor Department’s Aug. 2 employment report. That is down from 9.8 percent in June and 12.3 percent the same time last year. Overall, the construction labor force expanded from 8.08 million in July 2012 to 8.43 million in July 2013.

Across all industries, the nation added 162,000 jobs, falling short of consensus expectations that were in the neighborhood of 183,000 jobs. The private sector expanded by 161,000 jobs and the public sector added 1,000 jobs. The national unemployment rate fell to 7.4 percent in July, down from 7.6 percent in June and 8.2 percent in July 2012.

“The major source of construction employment loss was among nonresidential specialty trade contractors, which forfeited nearly 10,000 jobs in July,” Basu said. “This segment had been recovering nicely, but now appears to be feeling the effects of an economy growing at less than 2 percent.

“Meanwhile, the loss of 2,000 jobs in the heavy and civil engineering construction sector may be a partial reflection of sequestration,” said Basu. “Despite the job losses, the construction unemployment rate declined last month; however, much of the drop has been attributed to people leaving the industry.