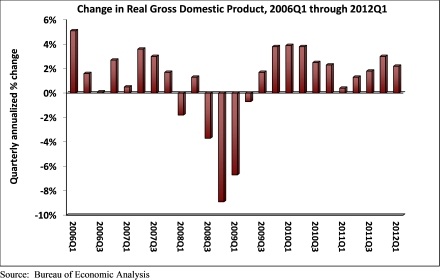 Nonresidential fixed investment in structures dropped 12 percent in the first quarter of 2012 following a 0.9 percent decrease in the fourth quarter of 2011, according to the April 27 Department of Commerce Gross Domestic Product (GDP) report.

Residential fixed investment jumped 11.9 percent during the past three months following an 11.6 percent increase the previous quarter. Exports increased 5.4 percent for the quarter, with exports of goods rising 4.1 percent and exports of services rising 8.6 percent. Imports also saw an increase, up 4.3 percent for the quarter, with imports of goods up 3 percent and imports of services up 11 percent.

Personal consumption expenditures increased 2.9 percent for the quarter, with expenditures of goods increasing 6.2 percent and expenditures of services increasing 1.2 percent. Changes in real private inventories added 0.59 percent to the first-quarter change in real GDP. Real final sales of domestic product, which is GDP minus the change in private inventories, increased 1.6 percent in the quarter following a revised 1.1 percent increase in the fourth quarter.

Gross domestic purchases – purchases of goods and services by U.S. residents wherever they are produced – increased 4.6 percent for the quarter following an increase of 4.3 percent in the previous quarter.

“Overall, today’s report was disappointing,” Basu said. “The consensus forecast had called for 2.5 percent GDP growth during the first quarter on an annualized basis, but the actual figure came in at 2.2 percent, and much of the disappointment showed up in the nonresidential construction category.

“Most of the good news in today’s GDP release pertains to consumer-related activity, which is a net positive for commercial construction,” Basu said. “For instance, personal consumption expenditures were up 2.9 percent and residential fixed investment was up 11.9 percent. The ongoing growth in U.S. exports was also positive, including for the industrial real estate market.”

For more information or to see previous reports visit: