“There are a number factors to point your finger at, including the ongoing economic slowdown in much of the world, such as Europe, China and India, along with concerns regarding America’s impending fiscal cliff.” —ABC Chief Economist Anirban Basu. 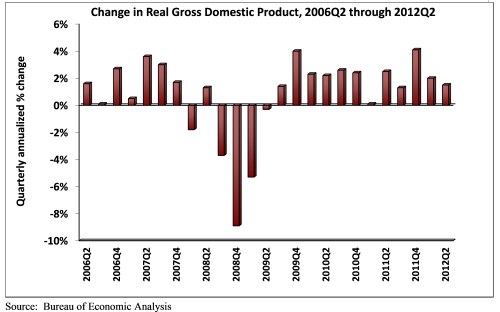 Investment in the nation’s nonresidential structures rose 5.3 percent in the second quarter of the year, following a revised 7.5 percent increase in the first quarter of 2012, according to the July 27 gross domestic product report (GDP) by the U.S. Commerce Department.

Meantime, nonresidential fixed investment in structures expanded by 0.9 percent, far slower than the 12.9 percent increase registered during the first quarter.

In contrast, nonresidential fixed investment in equipment and software expanded 7.2 percent during the second quarter compared to a 5.4 percent increase in the first quarter of the year.

In comparison, residential fixed investment rose 9.7 percent during the second quarter following a 20.5 percent surge in the previous quarter.

Gross domestic purchases – purchases made by U.S. residents of goods and services wherever they are produced – increased 1.8 percent in the second quarter while the final sales of domestic products rose 1.2 percent following 2.4 percent increase in the previous quarter. Overall, real GDP increased 1.5 percent during the second quarter following a revised 2 percent increase in the first quarter of the year.

“The slump continues as both the U.S. economy and nonresidential construction slowed during the second quarter of the year,” said Associated Builders and Contractors Chief Economist Anirban Basu. “There are a number factors to point your finger at, including the ongoing economic slowdown in much of the world, such as Europe, China and India, along with concerns regarding America’s impending fiscal cliff.

“However, the second quarter slowdown is due to more than a mere loss of confidence among business decision-makers and the accompanying sluggishness in construction starts,” Basu said. “Government at every level is now curtailing spending.

“State and local government expenditures have declined 11 quarters in a row, federal outlays are down in six of the past seven quarters and defense outlays have fallen for three consecutive quarters,” said Basu. “Despite that, the federal government continues to run a massive budgetary deficit – another cause for concern among business decision-makers.

“Given the inability of Congress to create greater certainty regarding the direction of tax and budgetary policy in 2013, ongoing economic turbulence in Europe and in much of the balance of the world, and corporate America’s focus on aggressively managing bottom lines, the economy is unlikely to pick up significantly during the months ahead,” Basu said. “This is not a positive sign for the nation’s nonresidential construction industry.

“Given still weak government finances, genuine recovery in nonresidential construction will need to be driven by private expenditures,” said Basu. “However, private construction decision-makers are not yet of the mind to push a significant volume of projects forward.”