“Coming into today’s release, the nonresidential construction industry was expected to have added jobs in May; instead, 500 jobs were lost.” —ABC Chief Economist Anirban Basu. 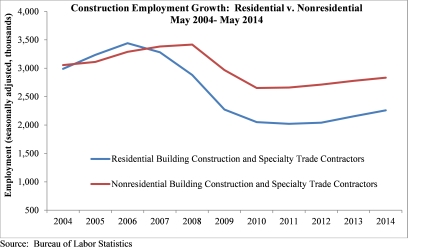 The U.S. construction industry only gained 6,000 jobs in May, according to the June 6 employment report by the U.S. Department of Labor (DOL). Nonresidential construction segments lost 500 jobs in May, a surprising departure from the 12,600 jobs (revised) added in April. The residential sector performed slightly better, adding 3,300 jobs for the month. The heavy and civil engineering sector added 3,200 jobs in May and has added an impressive 32,600 jobs in the past 12 months.

“Coming into today’s release, the nonresidential construction industry was expected to have added jobs in May; instead, 500 jobs were lost,” said Associated Builders and Contractors Chief Economist Anirban Basu. “While the nation added almost precisely the number of jobs collectively anticipated by economists, the jobs lost in the nonresidential construction segments, including 400 jobs among specialty trade contractors, came as a surprise.

According to the Bureau of Labor Statistics’ household survey, the national unemployment rate remained unchanged at 6.3 percent in May, remaining at its lowest level since September 2008. The civilian labor force expanded by 192,000 people in May, though it still has 614,000 fewer people than in May 2014.

• Residential building construction employment rose by 100 jobs in May and is up by 47,000 jobs (7.7 percent) on an annual basis.

• Nonresidential specialty trade contractors lost 400 jobs for the month, but employment in that category is up by 29.8 jobs (1.4 percent) compared to the same time last year.

• The heavy and civil engineering construction segment gained 3,200 jobs in May and job totals are up by 32,600 (3.7 percent) on a year-over-year basis.