The forecast is for subdued construction in the months ahead, with more rapid recovery expected late next year.” —ABC Chief Economist Anirban Basu. 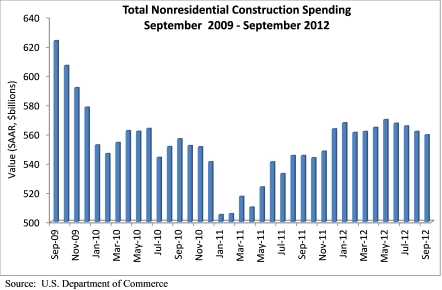 Nonresidential construction subsectors posting the largest decreases in spending for the month include religious, down 6.1 percent; health care, down 4.9 percent; commercial, down 4.5 percent; lodging, down 2.7 percent; and office, down 2.1 percent. Construction subsectors that experienced decreases in spending year-over-year include religious, down 16.8 percent; water supply, down 12.7 percent; conservation and development, down 6.5 percent; and educational, down 3.2 percent.

Six out of sixteen nonresidential construction subsectors posted increases for the month, including communication, up 6.4 percent; manufacturing, up 3.5 percent; amusement and recreation, up 2.8 percent; conservation and development, up 2.8 percent; transportation, up 2.4 percent; and power, up 1.3 percent. One-half of the nonresidential construction subsectors experienced increases in spending on a year-over-year basis, including lodging, up 25 percent; power, up 19.2 percent; transportation, up11percent; and office, up 2.4 percent.

“Concerns regarding the fiscal cliff, a slowing global economy and perhaps the November elections became more apparent in September’s construction spending data,” said Associated Builders and Contractors Chief Economist Anirban Basu. “A number of construction segments that were expanding in prior months retreated in September, including healthcare, commercial construction and office.

“It is likely that some members of the developer/owner community are putting their projects on hold in the hope that future months will bring in more policy and economic transparency and stability,” Basu said. “The implication is when various sources of uncertainty are addressed, including issues related to automatic sequestration, Europe and the Middle East, there will be a re-acceleration of nonresidential construction spending.

“It is suspected that October will be another month of hesitation among many economic decision-makers that will show lackluster nonresidential construction performance,” said Basu. “The forecast is for subdued construction in the months ahead, with more rapid recovery expected late next year.”