“It may be tempting for some to attribute recent progress in nonresidential spending to Hurricane Sandy reconstruction, but an analysis of the data suggests the ongoing recovery is significantly broader than these rebuilding efforts.” —ABC Chief Economist Anirban Basu. 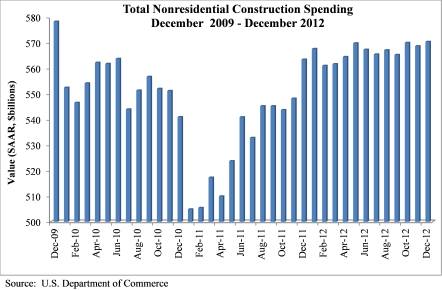 Six of the 16 subsectors experienced spending cuts in December. The three largest declines were sewage and waste disposal, down 8.4 percent; water supply, down 3.1 percent; and transportation, down 1.9 percent. Year over year, 11 subsectors reported spending decreases, including sewage and waste disposal, down 12.9 percent; public safety, down 12.7 percent; religious, down 10.1 percent; and conservation and development, down 9.3 percent.

Residential construction spending increased 2.1 percent for the month and is up 22.3 percent compared to the same time last year.

Total construction spending—which encompasses both nonresidential and residential spending—was up 0.9 percent for the month and is 7.8 percent higher than December 2011.

“Nonresidential construction activities in December appear to confirm the notion that the nation remains in recovery, despite news that gross domestic product turned negative during last year’s fourth quarter,” said Associated Builders and Contractors Chief Economist Anirban Basu. “While the pace of nonresidential construction recovery remains moderate, there is little indication that the recovery has stalled altogether.

“It may be tempting for some to attribute recent progress in nonresidential spending to Hurricane Sandy reconstruction, but an analysis of the data suggests the ongoing recovery is significantly broader than these rebuilding efforts,” Basu said.

“Specifically, the monthly growth in manufacturing and office-related construction indicates ongoing recovery in segments unlikely to be substantially associated with damage in New York, New Jersey and elsewhere in the Northeast,” said Basu. “However, some of the expansion in spending in the conservation and development categories may be related to the hurricane.

“The pattern of expansion in primarily privately financed segments accompanied by declines in primarily publicly financed segment continues,” Basu stated. “Job loss and declining spending continue to be associated with local governments around the country, and tight fiscal circumstances continue to be reflected in weak monthly performance in categories such as water supply and sewage and waste disposal.

“This pattern is likely to continue going forward, with spending in local government continuing to serve as a drag on macro-regional economies,” said Basu. “As reflected in the fourth quarter gross domestic product report, many federal agencies have reduced outlays, which is likely to result in slower overall economic growth as well as diminished demand for construction in key publicly financed segments.”