“The implication is that nonresidential construction spending will continue to recover, but only gradually.” —ABC Chief Economist Anirban Basu. 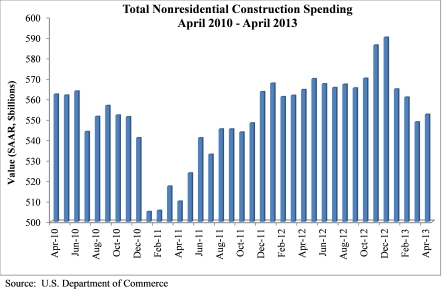 Eight of the sixteen nonresidential construction sectors posted increases in spending for the month, including power, up 7.8 percent; sewage and waste disposal, up 7.7 percent; and public safety, up 5.6 percent. Spending in other growth sectors was up less than 1 percent. Five sectors have registered increases in spending on a year-over-year basis, including lodging, up 16.6 percent; transportation, up 11.4 percent; manufacturing, up 2.1 percent; commercial, up 1.9 percent; and office, up 1.6 percent.

In contrast, eight nonresidential construction sectors experienced spending declines for the month, with the largest decreases were in religious, down 11.3 percent; conservation and development, down 5.6 percent; and communications, down 4.6 percent. Sectors recording the largest losses from one year ago include conservation and development, down 11.5 percent; educational, down 10.7 percent; and amusement and recreation, down 10.5 percent.

“In the larger context, at least four aspects of the broader economy that are expanding more briskly than construction,” Basu stated. “These include energy production, housing, consumer spending on automobiles and financial markets.

“The performance of these economic segments helps explain the increase in spending observed over the past year in categories such as power, commercial, lodging and office,” said Basu. “With consumer spending continuing to rise and the nation continuing to add jobs each month, the expectation is that these and many other private segments will continue to recover over the course of 2013.

“Meanwhile, weak state and local government budgets continue to plague the recovery,” Basu remarked. “Though some state budgets have improved materially in recent years, many states continue to wrestle with long-term deficits in their pension and healthcare funds, which will continue to suppress public construction investment in the near future.”