In a bit of unexpected news, nonresidential construction spending, which includes both privately and publicly financed construction, was $553.1 billion in August, up 1.6 percent for the month and 0.1 percent higher from one year ago, according to the October 3 report by the U.S. Census Bureau. 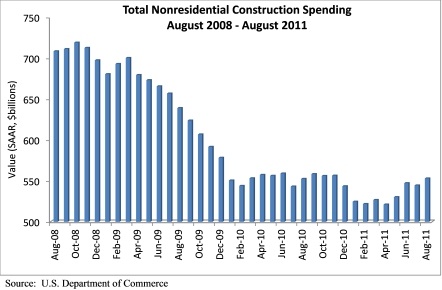 “However, many economists continue to stress the possibility of another recession, which, among other things, would have the impact of further constraining demand for construction services,” Basu said.

“Over the past month, both publicly and privately financed construction spending grew – an indication that recessionary forces are being held at bay for now,” said Basu. “Among the leading categories of monthly growth were conservation and development, public safety, and sewage and waste disposal.

“It is worth noting that publicly financed construction expanded more rapidly than privately financed construction. This is certainly a reversal of recent previous reports,” said Basu. “Given the fiscal condition of state and local government budgets, and with federal stimulus money continuing to be spent, the public sector is not well positioned to motivate growth in the demand for construction sectors in the months ahead.”