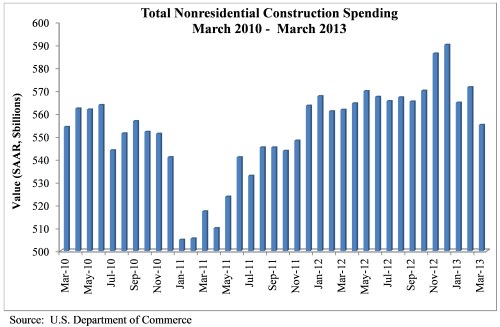 Only three subsectors reported monthly gains: lodging, up 1.6 percent; religious, up 2 percent; and communication, up 4.5 percent. On a year-over-year basis, the largest gains were registered in transportation, up 19.1 percent, and lodging, up 11.6 percent.

“To a certain extent, today’s release reinforces the pre-existing trend,” said ABC Chief Economist Anirban Basu. “A number of segments associated with public financing have been in decline for quite some time and those declines persisted in March. Among the hardest-hit categories have been water supply, public safety, and sewage and waste disposal – segments that depend heavily on state and local government spending.

“However, there is weakness creeping into many private segments as well,” Basu said. “Overall, private nonresidential construction spending declined 1.5 percent for the month, an indication that many developers and their financiers remain hesitant. That said, leading construction indicators generally remain positive, suggesting that improved performance is still possible later this year.

“Unfortunately, the overall economy appears set to decelerate during the second quarter,” Basu said. “Should the economy slow down as much as it did during the previous second quarter, it is unlikely that the construction leading indicators will remain so positive. Although questions remain regarding the ultimate impact of sequestration and still-fragile state and local government budgets, the consensus forecast calls for ongoing economic recovery in 2013.”