“With certainty, we can predict a continuing expansion in private construction segments and stagnant to deteriorating spending in public categories in the months ahead.” —ABC Chief Economist Anirban Basu. 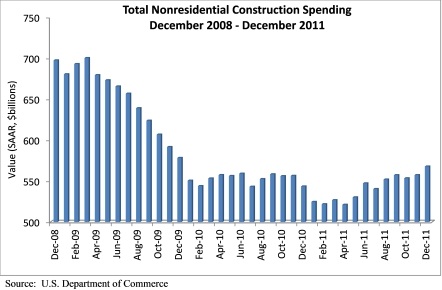 In contrast, construction subsectors posting the largest monthly decreases in spending include lodging, down 2.3 percent; public safety, 1.9 percent lower; and amusement and recreation, down 1.5 percent. Subsectors with the largest year-over-year decreases in spending include religious, down 19.4 percent; lodging, 15.2 percent lower; transportation, down 9.8 percent; and conservation and development-related construction, down 9 percent.

“Construction segments associated with state and local spending continue to struggle – not surprising given the ongoing economic stress on local government finances,” Basu said. “The winding down of the federal government’s 2009 stimulus package also likely plays a role in the poor performance of segments such as conservation and development and transportation.

“Certain private construction segments also continue to struggle, most notably lodging, in which spending fell 15.2 percent during the past year and was down 2.3 percent for the month,” said Basu. “On the other hand, manufacturing rose again in December, this time by 13.4 percent. The subsector is up 44.2 percent for the year.

“Of all the segments, the ongoing expansion in construction related to energy appears to be the most peculiar,” Basu said. “Energy companies continue to search for ways to increase domestic production, and energy continues to create construction activities despite a myriad of issues including low natural gas prices and shaky financing conditions with respect to nuclear energy.

“With certainty, we can predict a continuing expansion in private construction segments and stagnant to deteriorating spending in public categories in the months ahead,” said Basu.