“It remains likely that the economy will accelerate a bit during the second half of the year, but there continue to be headwinds.” —ABC Chief Economist Anirban Basu. 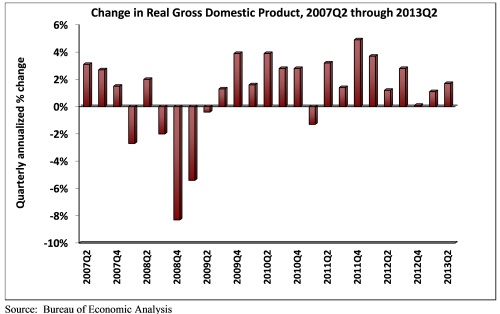 Nonresidential fixed investment in structures expanded 4.6 percent on an annualized basis during the second quarter of 2013, according to the July 31 gross domestic product (GDP) report by the U.S. Commerce Department. This increase followed a 4.6 percent decline in the first quarter of the year.

Personal consumption expenditures expanded 1.8 percent in the second quarter, with spending on goods rising 3.4 percent. Expenditures on services, on the other hand, advanced only slightly at 0.9 percent. Expansion in real private inventories contributed 0.4 percentage points to real GDP growth for the second quarter after adding 0.9 percent during the first quarter.

In total, real GDP expanded 1.7 percent during the second quarter following a revised 1.1 increase in the first quarter of the year.

“There was nothing particularly shocking in today’s GDP report,” said Associated Builders and Contractors (ABC) Chief Economist Anirban Basu. “As predicted, the economy expanded less than 2 percent during the second quarter, though many predicted today’s GDP growth estimate would be below 1 percent.

“Overall, consumer spending remains at the heart of the nation’s economic recovery, including in housing-related categories,” said Basu. “However, today’s GDP report is only modestly reflective of recent increases in mortgage rates, which could soften residential investment growth in the months ahead.

“ABC continues to forecast roughly 2 percent growth in the U.S. economy in 2013, though the first half was associated with sub-2 percent growth,” Basu said. “It remains likely that the economy will accelerate a bit during the second half of the year, but there continue to be headwinds such as rising interest rates, sequestration and a loss in municipal confidence in the aftermath of Detroit’s bankruptcy.

“Key Federal Reserve officials are among those who anticipate a second half snapback and appear poised to alter monetary policy accordingly,” said Basu. “Therefore, the benefits to the nonresidential construction industry associated with faster growth easily could be offset by the negative impacts of rising interest rates.”