Associated Builders and Contractors (ABC) released its Construction Backlog Indicator (CBI) for the first quarter of 2012. CBI declined 5.4 percent from the previous quarter, dipping from 7.8 months to 7.4 months, but is slightly higher compared to the first quarter of 2011. CBI is a forward-looking economic indicator that measures the amount of construction work under contract to be completed in the future.

“The ongoing instability in the nation’s nonresidential construction industry appears to be related to the period of economic weakness that developed in the broader economy last year, as well as concerns regarding export growth due to recessionary forces in Europe,” Basu said. “The result is that many prospective construction projects were cancelled or postponed.”

“The South, which includes a number of rapidly expanding, commodity rich states, continues to be the top performer in terms of producing new opportunities for contractors,” said Basu. “Though average construction backlog in the South was roughly flat during the past quarter, backlog is up by seven-tenths of a month from one year ago. No other region has generated an increase in backlog that large.

“Construction backlog expansion in the Middle States continues to be stifled,” Basu said. “Gains in industrial production have been sporadic during the past year – too scattered to induce the next wave of manufacturing-related construction projects. In addition, average construction backlog in the Northeast has fallen on a year-over-year basis. Last year’s soft patch, including the economic weakness associated with the debt ceiling issue, appears to have impacted the financial institution-rich Northeast more than other region.” 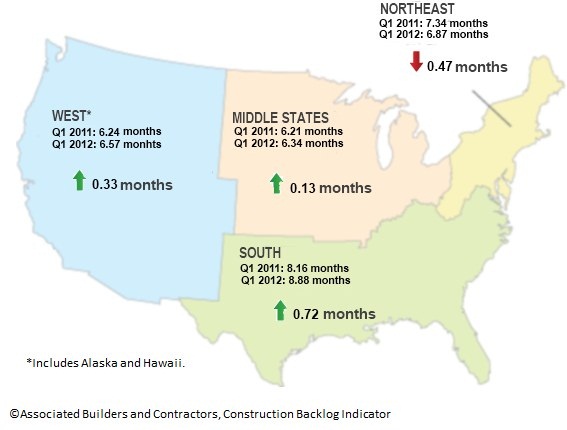 “Virtually all recent economic data regarding consumer spending, such as retail sales, have increased,” said Basu. “This news likely will translate to continued momentum in commercial construction activity, as reflected in the first quarter CBI. Institutional construction also continues to grow due to the ongoing expansion of the nation’s health care industry.

“In contrast, average construction backlog in the infrastructure category is nearly two months lower than the third quarter of 2009, when a growing number of stimulus-related projects were beginning to move from planning to implementation,” Basu said. “Based on the latest backlog data, infrastructure spending is likely to remain flat for the balance of the year.”

“The rebound in commercial construction appears to have positively impacted contractors in the $30 million to $50 million revenue category,” said Basu. “This segment should continue to experience rising construction backlog due to the momentum in this construction industry sector.

“On the other hand, firms with revenues in excess of $50 million have not been able to progress substantially in construction backlog during the past year,” Basu said. “This is primarily due to stagnant backlog in the heavy industry and infrastructure categories, two construction sectors with which many large firms are closely affiliated.”

Associated Builders and Contractors (ABC) Visit us at www.abc.org.