Associated Builders and Contractors (ABC) today reports that its Construction Backlog Indicator (CBI) for the first quarter of 2011 averaged 7.3 months, a 4 percent increase from 7.1 months during the fourth quarter of 2010, and up from 6.1 months, or an increase of 21 percent, from one year ago. CBI is a forward-looking indicator that measures the amount of construction work under contract to be completed in the future.

“While the commercial and industrial construction industry is no longer in deep decline, meaningful recovery remains elusive, with CBI still below levels associated with vigorous nonresidential construction activity,” said Associated Builders and Contractors Chief Economist Anirban Basu. “However, crisis conditions have abated and the indicator is moving in the right direction. CBI is now 33 percent above its historic low point of 5.5 months registered in January 2010.

“The expectation is that the U.S. economy will fall short of growing 3 percent in 2011. At the same time, other macroeconomic factors, including sharp increases in construction materials prices, have the potential to reverse the stabilization in activity that ABC presently observes,” Basu said.

“The improvement in commercial construction-related backlog is precisely what ABC observed and forecasted in its previous report, and we anticipate that this segment will continue to show signs of life and growth in the months ahead,” Basu said. “However, given tougher lending standards and high vacancy rates in a number of commercial categories, stakeholders should not anticipate any burst of activity this year.” 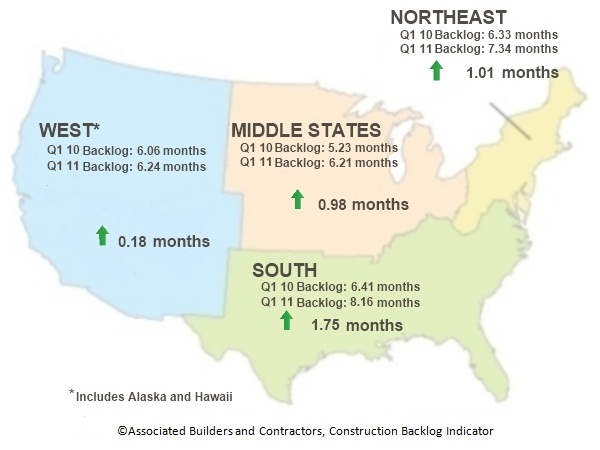 “With investment in power generation and natural resource exploration having taken a leadership role in the nation’s economic expansion to date, regions that are more natural resource intensive have generally experienced the largest increases in construction backlog. This helps explain the significant improvement in backlog in the South and Middle States since the fourth quarter of 2009,” said Basu. “In contrast, much of the western United States is associated with disproportionately high unemployment and largest state fiscal shortfalls, which explains the general lack of improvement since the end of 2009.”

“What CBI indicates is that there is a rotation in construction spending taking place, with infrastructure-related spending slowly slipping as stimulus monies are spent down and commercial construction gradually stabilizing along with the broader economy. This pattern will likely continue going forward, but overall construction volume is positioned to decline over the next several months before stabilizing later this year or sometime in 2012,” Basu said. “If construction materials prices are better behaved going forward, the recovery in commercial and heavy industrial construction may accelerate. However, infrastructure-related construction is largely dependent upon government budgetary decisions and for now the focus remains largely upon government cost-cutting as opposed to accelerating investment.”

“Backlog continues to expand among the smallest, most fragile construction firms. This is largely attributable to the broadening of the construction recovery beyond the infrastructure segment. Backlog may also be stabilizing for this group due to high failure rates among competitors, who correspondingly cede market share to surviving firms. Backlog for firms in the second smallest category, those with revenues between $30 million and $50 million per annum, is roughly unchanged from year-ago levels, suggesting that for many contractors the recovery is far from vigorous,” said Basu. “Interestingly, backlog continues to rise for the largest firms on average despite the gradually diminished impact of federal stimulus spending.”