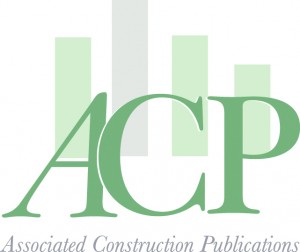 ACP site.  Jill Paskoff, vice president operations, said, “Because we are an audited publication we need to have people request the magazine directly and answer the questions on the page to satisfy our postal and audit requirements.”

John White acquired the ACPs shortly after being shutdown by Reed Construction Data. In July the new organization published two of the magazines; in August six; and in September all 13 will be mailed. The magazines have gone through a couple of major changes.  They will now be published monthly and will be tabloid sized. White said, “The new format makes the magazines easier to read and gives us the flexibility to add more graphics and content.”

White was able to attract many of the former ACP employees for sales, production and editorial.