U.S. exports fell to all world regions for 2014. Business to Europe, South America and Australia/Oceania was the hardest hit, according to the Association of Equipment Manufacturers (AEM), citing U.S. Department of Commerce data it uses in global markets reports for members.

The top countries buying the most U.S.-made construction machinery during 2014 (by dollar volume) were:

While exports have been decreasing steadily since the second quarter of 2012, imports have been trending higher. The fast growth in the post-recession export figures (2009-2012) was a strong driver for domestic manufacturers, though it appears the domestic market has become one of the more robust growth engines for the industry.

The recent declines in total construction equipment exports, which were in line with regional development, have been partly due to:

From a global perspective, the U.S. market remains strong, though somewhat affected by the oil price declines.

In the global markets:

AEM’s Construction Equipment Global Markets report (and select other reports) are available to the public online (www.aem.org) through the AEM store (www.safetymaterials.org). AEM members may access the report via the AEM website/Market Intelligence section. 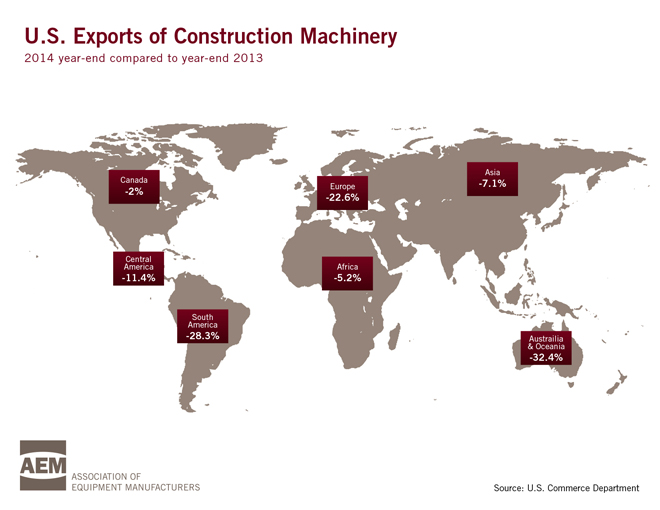