The drive from Tuscaloosa to Atlanta, GA for The Rental Show, sponsored by the American Rental Association (ARA), was uneventful. The snow had melted off the roadways and only small patches still remained hidden from the sun along the embankments.

This year, the 53rd Rental Show was held for the sixth time at the Georgia World Congress Center and started with training sessions on Sunday and Monday. The exhibits opened on Tuesday with exhibitors displaying products and equipment of interest to rental dealers. As the world’s largest rental trade show, successful rental businesses around the globe consider it the one event of the year they can’t miss. It’s the place to research products firsthand, meet others in the industry and learn valuable ideas you can use right away in your business.

The following is a partial list of equipment manufacturers that held press conferences and/or introduced new products during the show: 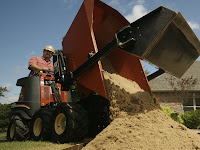 Over the next few days we will review some of these product introductions and updates.

The overall tone of the show was improved when compared to earlier shows I have attended. There was more confidence that stimulus money would really be distributed and projects that have been ready and waiting since the economy took a nosedive would resume.

Again the biggest concern was the availability of money. Show attendees were still saying that it was not easy to get but had improved in the last 30 days. There are still concerns that it may take too long to get the economy turned around and moving in an optimistic direction. A number of manufacturers said that they were selling equipment and making deals.