U.S. Transportation Secretary Anthony Foxx today released the Obama Administration’s four-year surface transportation reauthorization proposal that would increase federal highway investment by almost $10 billion per year and public transportation investment by nearly $7.5 billion annually from FY 2015-2018. The four-year, $302 billion GROW AMERICA Act— Generating Renewal, Opportunity, and Work with Accelerated Mobility, Efficiency, and Rebuilding of Infrastructure and Communities throughout America—does not contain a specific, dedicated revenue proposal. The proposal calls for transferring $150 billion in revenue from a rewrite of the nation’s corporate tax laws to the Highway Trust Fund. While that concept for replenishing the fund is similar to what House Republicans have advocated, the trust fund’s revenue crisis will materialize in a matter of months and Congress will not be considering tax reform in 2014.

Only three major changes are proposed to the MAP-21 highway program structure. First, the Administration proposes to create a new Fixing and Accelerating Surface Transportation (FAST) program, which would provide $500 million each year of the bill to generate long-term systematic innovations and reforms in surface transportation. Second, the Administration would upgrade MAP-21’s freight policy program with dedicated funding of $10 billion over the four years. Third, the Administration proposes a “Fix-it-First” initiative called the Critical Immediate Investments Program (CIIP). This initiative would allocate $13.4 billion over four years to “reduce the number of structurally deficient Interstate Highway System bridges, target safety investments and support a state of good repair on the National Highway System.” Funding for all three is included in the highway total.

Total highway funding, including the FAST proposal and funds not subject to the obligation limitation, would be $48.6 billion, up from $41.0 billion in FY 2014. The total would grow to $51 billion by FY 2018. Year-by-year details are shown in the table below.

The bill would upgrade the “Moving Ahead for Progress in the 21st Century” (MAP-21) reauthorization law’s freight policy provisions by creating a new “Multimodal Freight Investment Program.” This initiative would provide $10 billion for rail, highway and port improvements that would enhance efficient movement of goods within the country and abroad. Funding would grow from $1 billion in FY 2015 to $4 billion in FY 2018 and is included in the $199.2 billion allocated for the Highway Program.

The proposed freight program would consist of two elements. A “Multimodal Freight Incentive Program” would apportion half the funds among the states by formula for capital projects on approved state freight plans, with forty percent of a state’s funds for in-state improvements and sixty percent for cooperative improvements involving at least one adjacent state. The remaining funds would be reserved for the Secretary to fund the “National Freight Infrastructure Program,” which would provide grants to states, local governments, MPOs and public transportation authorities on a competitive basis for projects that reduce freight costs, remove bottlenecks, improve safety or increase the state of good repair of the freight network. Funds could be used for improvements to any element of the national freight network, including roads, rails, landside infrastructure on ports and airports, and intermodal connectors.

The proposed freight program recognizes that the Federal government has an important role in facilitating safe and efficient freight movement in the United States as ARTBA articulated with its proposed 2007 Critical Commerce Corridors national goods movement program. Of concern, however, is that the proposal would, for the first time, allow revenues deposited in the Highway Account of the Highway Trust Fund to be used for improvements to railroads and ports.

The Administration’s reauthorization proposal would provide a 4-year total of $72.3 billion for the Public Transportation program. There would be a big jump in funding in FY 2015 to a total of $17.6 billion, up from $10.7 billion in FY 2014. This would grow to $18.7 billion by FY 2018. Most of the proposed increase would be for the Formula and Bus Grant programs, which provide funds to transit agencies around the country for capital improvements and bus purchases.

Funding for the Capital Investment Grants (New Starts) program, which is the source of federal funds for major subway and light rail construction projects, would be increased to $2.5 billion in FY 2015 from $1.9 billion in FY 2014. This would grow to $2.9 billion by FY 2018, for a 4-year total of $10.8 billion. In addition, funding for the New Starts program would be shifted from the general account to the Mass Transit Account, which means it would no longer require an annual appropriation.

Two new transit programs are proposed. A Rapid Growth Area Transit Program would provide $500 million in FY 2015, and a four-year total of $2.2 billion, for bus rapid transit, while the transit part of the FAST program described above would have $500 million per year.

All surface transportation programs including those currently funded from the General Fund, such as the TIGER program and the transit Capital Investment program, would be moved into the TTF. The Administration proposes to re-classify this fund as mandatory spending, which would not be subject to the annual appropriations process. This reform would make the fund’s budgetary treatment comparable to that of Social Security and interest on the national debt.

As part of its surface transportation reauthorization plan, the Administration is proposing a major revamping of the federal programs that fund intercity passenger rail, including Amtrak. The current operating and capital investment programs for Amtrak would be replaced with two new entities. A proposed Current Passenger Rail Service program would provide funding for repairs to passenger rail and resources to continue long-distance rail service. A proposed Rail Service Improvement Program would fund development of high-speed intercity rail and rail safety improvements.

The Administration requests $4.8 billion for these two rail programs in FY 2015, up from $1.6 billion in FY 2014, and a 4-year total of $19 billion. Funds would come from the proposed Rail Account of the TTF. Federal investment in passenger rail has required separate legislation in the past and would be a new element in the surface transportation bill.

The Administration proposes to more than double funding for the National Infrastructure Investments program, popularly known as the TIGER program, from $600 million in FY 2014 to $1.25 billion in FY 2015. The same amount is proposed for each of the next three years, for a four-year total of $5 billion.

Funding for the TIGER program, which provides competitive grants for improvements of national or regional significance in all transportation modes, is in addition to the regular highway and mass transit programs and has come from the general fund, not the Highway Trust Fund. Under the Administration’s proposal, the TIGER program would get its own National Infrastructure Investments Trust Fund, with the money coming from the new Multimodal Account of the TTF. 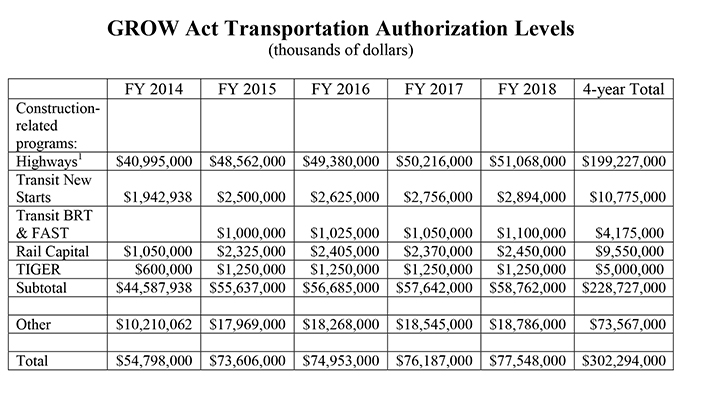 1 For FY 2015 – FY 2018, highway data represent contract authority; no information was provided on the Administration’s proposed obligation limitations. Differences, however, should be slight.