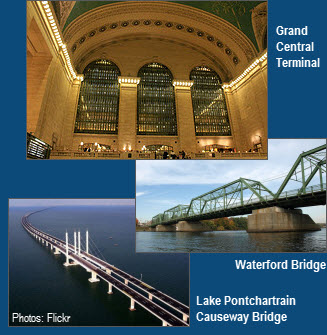 As each civil engineering achievement builds on past successes, ASCE honors the greatest as National Historic Civil Engineering Landmarks.

ASCE’s Board of Direction approved the designation last year. This month, the Board formally approved the selections of two new Society landmarks:

•  The Waterford Bridges, both the current and former spans across the Hudson River at Troy, N.Y. The original bridge was the first to cross the Hudson in 1804, until destroyed by fire and replaced by the existing bridge in 1909.

Dedication ceremony dates for each landmark are to be decided.