On April 9, 2015, 300 organizations, along with local, state and federal elected officials, business and transportation leaders, public transit advocates, and transit riders joined in events for “Stand Up for Transportation Day,” calling on Congress to find a fix for the Highway Trust Fund before the federal transportation program expires on May 31.

As part of the day, ASCE co-hosted a forum in Greenville, South Carolina with Ten at the Top and Building America’s Future. The event attracted over 150 attendees on a sunny afternoon and featured ASCE 2013 President Greg DiLoreto as well as Former Pennsylvania Governor Ed Rendell. Both discussed the urgent need to preserve federal funding for transportation, and the benefits of expanding transit service in growing areas such as Greenville.

In addition, new analysis from the American Public Transportation Association shows the real impacts that the lack of a federal transportation program would have on public transportation systems and on the communities they serve. The report estimates the loss of the federal transit program could mean a $13 billion hit to rural economies over the next six years. The report also looked at regional impacts – the South would lose nearly $37 billion to its economy, and more than 6,500 buses would not be replaced; the Midwest $31.2 billion and 6,100 buses; the Far West $22.9 billion and 5,000 buses; and the West Coast $63.9 billion, and 10,000 buses would not be replaced. Join this effort and urge your member of Congress to stand up on this issue. 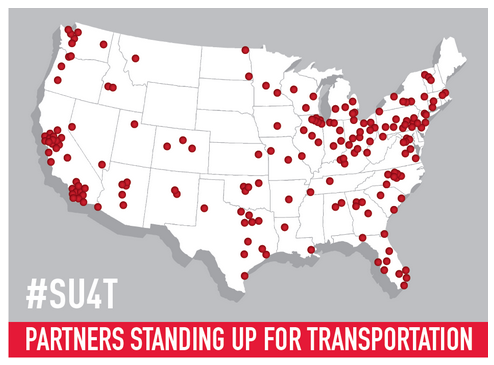