Highly modified asphalt is undergoing trials across the U.S. as agencies seek to make roads safer and more durable while cutting overall costs 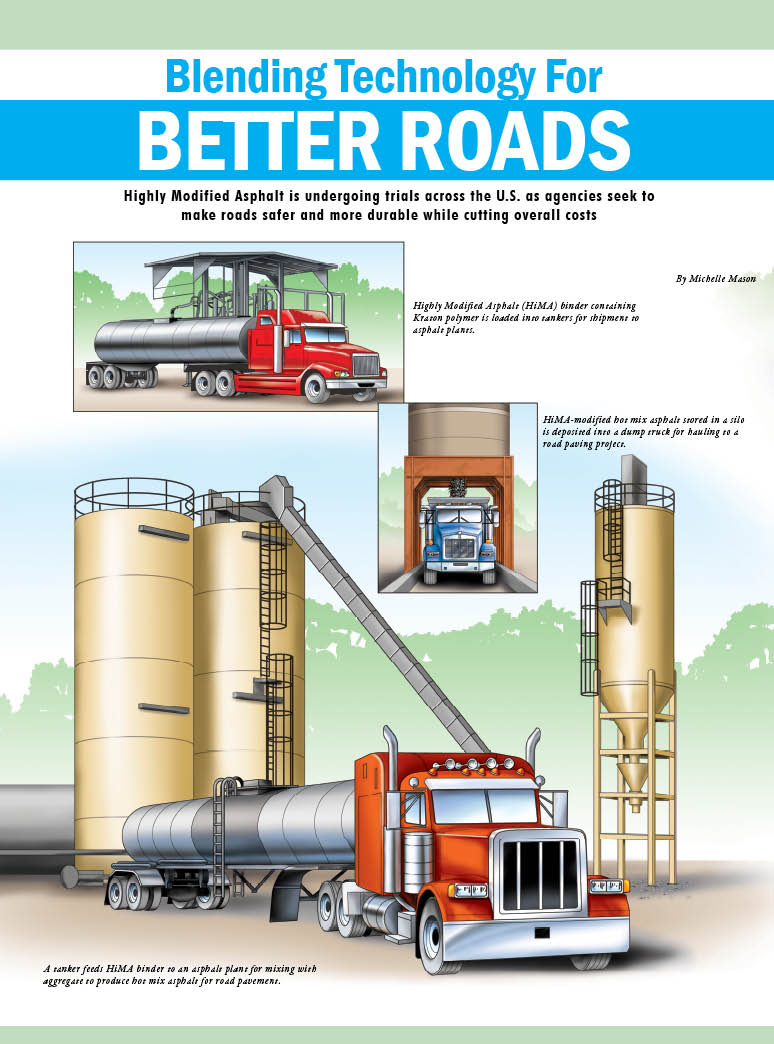 Asphalt-paved roads have been a vital part of our country ever since the first ones were laid in the 1870s, in such notable locations as Fifth Avenue in New York and on Pennsylvania Avenue in front of the White House.

In the early 20th century, paved roads made it possible for the auto industry to grow, for communities to be less isolated, and for factory owners and farmers to sell their goods farther and faster.  In fact, one of the rallying cries for the Federal Road Act of 1916 was “Get the farmers out of the mud!”

Nearly one hundred years later, paved roads carry a lot of traffic – which takes a heavy toll on pavement, vehicles, and drivers. While U.S. road miles have increased only 10% since 1960, they now handle almost four times the traffic.

The biggest challenge to the life of any paved road is Mother Nature.  The extreme cold of winter can open up pavement cracks.  Summer’s blistering heat can soften asphalt pavement so much that the weight of passing cars and trucks can cause dangerous ruts.

A good road is free of the ruts, cracks and potholes that can slow you down or worse, damage your car’s tires and suspension.  It’s free of loose stones that can bounce up and damage car windows or paint.  A good road allows you to drive at speed, without the delays and congestion caused by extensive road repairs.

For a modern road to meet the triple demands of higher traffic volume, lower transportation budgets, and the specific needs of a local climate, transportation officials have been searching for ways to make asphalt pavement more durable, thinner, stronger and more cost-effective. 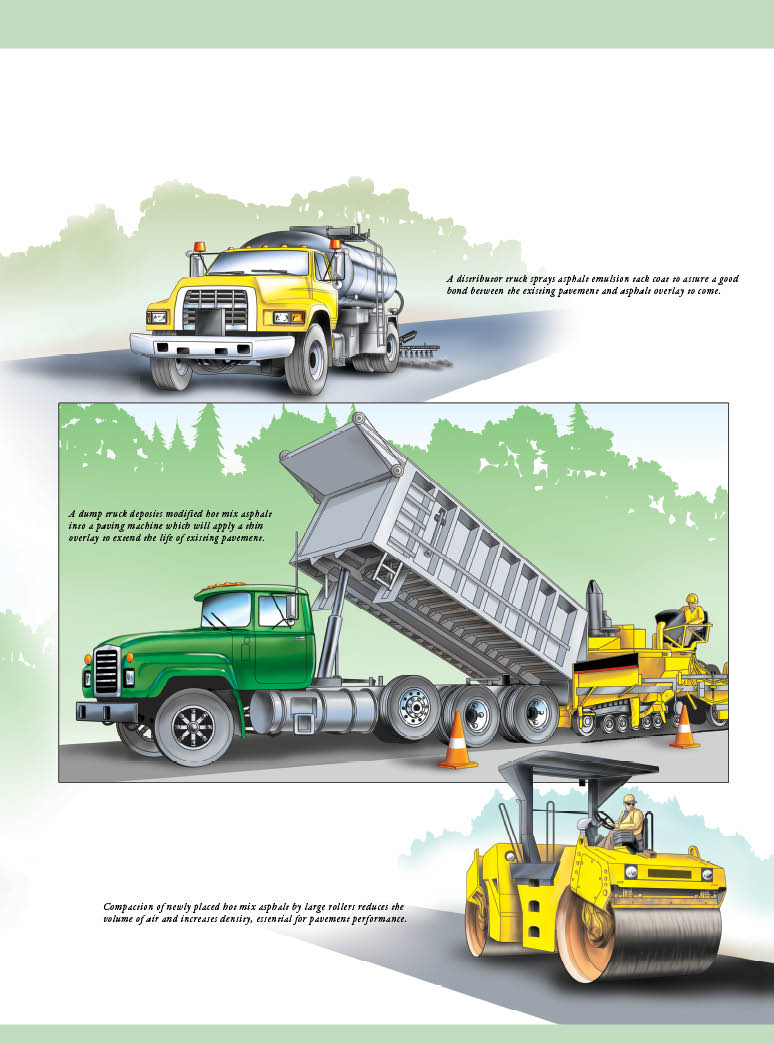 How Pavements Are Made

Paved roads are such a routine part of modern life that most of us barely consider the pavement component that enables asphalt roads to “give” a little, but not too much, so they are able to withstand heavy traffic and extreme changes in temperature: liquid asphalt cement.

Asphalt pavement is a mix of two components: aggregate (such as sand, gravel, and crushed stone) and liquid asphalt binder, the “glue” that holds the aggregate together.

Here’s a snapshot of how aggregates and asphalt binder come together to make the asphalt pavement:

At an asphalt mix plant, the aggregate is usually dried to remove moisture.  The binder is heated to keep it in liquid form and to help coat the aggregate. The two are mixed together and then taken by haul trucks to the paving site.  The hot asphalt pavement is paved onto the road surface in layers (also known as “lifts”) and compacted with steel rollers.  Once it cools, the asphalt pavement hardens and can be driven on by traffic.

The amount and type of binder used is a primary factor in determining the durability and thickness of an asphalt paved road.

The 20th century saw many advances in asphalt pavement construction, including the use of new materials in the binder to help improve its performance, such as ground tire rubber (GTR), synthetic fibers, polymers and chemical additives.  These materials are called modifiers.  Today, one of the most widely-used modifiers for asphalt pavement binders is SBS polymer, a synthetic rubber granulate that is thermoplastic: it can be shaped by heat.

Not being able to use a higher percentage of SBS polymer modifier in the binder has frustrated transportation agencies, because more SBS could mean a stronger but thinner pavement.  This would translate into immediate savings since less aggregate would be needed.

Kraton overcame the polymer content limit by developing a new modified SBS polymer, which can be blended with the asphalt binder in dosages of up to 8% — twice the amount of traditional SBS polymers — gaining the benefits of increased polymer content without increasing binder stiffness.

Combining the new polymer with the asphalt binder produces Highly Modified Asphalt (HiMA), a binder capable of reducing the required the thickness of the asphalt pavement by 30-50% (depending on pavement condition, subsoil used, and local climate).

How does HiMA achieve these results?

Think of HiMA as a safety net whose “links” are Kraton polymer molecules.  These are astronger and are highly elastic.  Even after extended exposure to  extreme heat and extreme weight, they’ll bend but retain their shape.  In prolonged, extreme cold, they do not become brittle.

Since 2007, the Houston-based company has been performing pavement design modeling and extensive lab testing with HiMA polymers to help predict performance. In addition, the company continues to conduct elaborate testing with the National Center for Asphalt Technology and their pavement test track at Auburn University in Alabama.

In Danby, Vermont, the Vermont Agency of Transportation (VTrans) used HiMA to install an overlay to preserve a section of US Route 7, one of many roads heavily damaged by the 2011 floods, the worst flooding the state had seen in 80 years.

To reduce cracking caused by winter temperatures that frequently dip below zero, in 2011 the Minnesota DOT used HiMA for a major “mill-and-fill” operation (mill off damaged pavement and fill with new pavement) on a busy section of highway near Minneapolis that sees 64,000 vehicles each day.  To further reduce costs, the Minnesota DOT was able to use 25% recycled asphalt pavement (RAP) in the asphalt mix.

In 2010, the Georgia DOT installed Highly Modified Asphalt pavement to repair the intersection of Routes 138 and 155 in Stockbridge, which is located at the bottom of a hill.  This location presented complex challenges: punishingly hot summer temperatures, a daily traffic stream of about 25,000 vehicles, and severe pavement rutting and shoving caused by the frequent braking of vehicles on the descent toward the intersection.

HiMA is also being used by the state transportation departments in Alabama, Oklahoma, Tennessee, Massachusetts, New Jersey and Oregon for paving work in 2012.

In each of these diverse road and climate conditions, transportation officials report that the HiMA pavement mix proved to be as workable as asphalt pavement mix made with traditional modified binders.  The contractors’ crews do not need special training or new equipment. Nothing special needs to happen at the asphalt mix plant, either.

The new binder does not require special equipment or a higher temperature to remain workable: it can be processed with existing equipment and at the same level of heating as binder using traditional SBS polymers.

Though Highly Modified Asphalt costs more than traditional SBS polymer modification, transportation departments are finding that this cost is offset by the overall savings at installation and by the savings to be realized in lowered long-term road maintenance.

The ratio made possible with a higher modified binder and less aggregate provides an up-front savings not just in material purchased, but in fewer trucks and road equipment used per job, and less total fuel needed per job for trucks and for road equipment.

Beyond the economics, asphalt pavement made with HiMA achieves two goals of any transportation agency: increased driver safety and fewer cycles of road maintenance.  The new product’s powerful resistance to rutting and cracking in all weather conditions means fewer road hazards for drivers, and less wear-and-tear on vehicle tires and suspension systems.

HiMA’s ability to increase pavement strength and durability would be attractive in any era, but these features are especially important for today’s roads.

America has nearly four million miles of paved public roads, including 47,000 miles of the Interstate Highway System.  The total number of highway miles increases to a dizzying amount if you calculate in 210,000 lane miles, 15,000 interchanges, and 55,000 bridges.  Traffic on many roads, especially those in and around large cities, continues to grow.

Yet as traffic volume increases, transportation budgets in most states are decreasing: making every road with a longer service life even more valuable. As transportation departments seek technology and materials that can create more cost-effective roads that are safe and durable, Highly Modified Asphalt binder offers a promising solution.

This article appeared in the July 2012 issues of the ACP magazines.