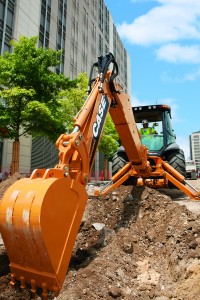 “The N Series was engineered from the ground up,” said Rob Marringa, marketing manager, Case Construction Equipment. “We’ve taken the flagship product of the Case lineup and delivered best-in-class performance from back to front. The new N Series really is ‘stronger everywhere.’ The N Series extends a legacy of loader/backhoe leadership that began when Case introduced the industry’s first factory-integrated loader/backhoe in 1957.”

“One new feature that is a real game-changer on the N Series is Case-exclusive Power Lift™,” said Marringa. “Power Lift channels the hydraulic power directly to the boom with the touch of a button. As a result, our backhoe lifting capabilities outperform competitive models by as much as 39 percent – while running at low engine RPMs.”

By providing lift capabilities comparable to a five-ton excavator, with superior dig depths, the N Series loader/backhoes may eliminate the need to trailer an excavator to the jobsite.

“During our extensive R&D process, we enlisted equipment operators throughout North America to test the N Series enhancements,” explained Marringa. “Comments from Dennis Zentner, DRZ Contracting, in Delta, British Columbia, were typical. He told us, ‘The 580SN WT backhoe performed well on grading, trenching, backfilling, heavy lifting, hole-patching and rock-breaking. Its heavy-lifting ability is fantastic. It will save me from using an excavator for lifting.’”

The Case N Series machines also deliver more power to the loader, for increased breakout and lift capabilities. The new loader arms are stronger and longer, providing greater loader reach. This lets operators dump material into the center of a truck for faster 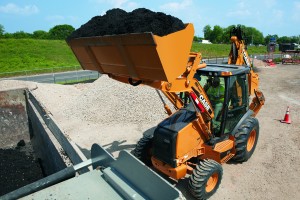 A new auxiliary hydraulic system for powering attachments includes Flow Control as a standard feature, automatically matching hydraulic flow to the needs of the attachments. Additionally, hoses are routed inside of the boom structure to provide greater protection for applications such as demolition. These improvements in hydraulics also help achieve greater fuel efficiency.

Marringa added that Case loader/backhoes have always given contractors a solution for excavating, digging, carrying and loading. “A loader/backhoe’s versatility includes the ability to drive to a jobsite. The Case machines can travel at up to 24 miles per hour – and the over-center backhoe design makes travel smoother.” 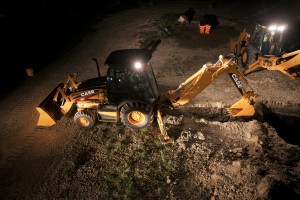 “The new N Series machines light up the entire perimeter of the machine,” said Rob Marringa, marketing manager, Case Construction Equipment. “This means the entire side-to-side range of backhoe movement – and beyond – is illuminated. This not only gives the operator a better sense of control; it also boosts productivity at any time of day or night.”

The N Series loader/backhoes include comfortable, adjustable operator seats and ergonomically placed controls along with all-season heating and air conditioning systems for increased operator comfort. The N Series cabs are also among the industry’s quietest – at 72 decibels – providing an environment in which the operator can concentrate on the task at hand.

What do operators think of the new N Series? Following are comments from five test operators:

“It’s an extremely strong backhoe with a bigger, heavier boom. We’re using it to drop heavy sections of pipes into the trenches we’re digging. These are big pipes with 500-pound fittings – the N Series machine handles them easily.”

“The 580SN WT loader/backhoe performed well on grading, trenching, backfilling, heavy lifting, hole-patching and rock-breaking. Overall, it’s a great machine. Its Power Lift ability will save me from using an excavator.

“Case did a great job redesigning the backhoe boom. It’s an improvement and definitely stronger than competitive models I’ve used.

“The new machine has better visibility from the cab and better airflow. The new cab windows are a good safety feature. You can talk with someone without their having to walk around the machine.”

“It’s a very solid machine – very powerful. I used the backhoe to dig 3- by 5-foot slabs of concrete, and I was surprised at how easily the machine handled it.

“The backhoe has excellent digging power. I dug 7- and 8-foot-deep trenches through all kinds of soil. Very impressive performance.

“We took it out on a job where we had to knock down a cinder-block house on a rainy day with sloppy working conditions. I thought we’d have to come back on a better day, but it didn’t matter. The machine completed the job with no problem, even with the poor operating conditions.

“It’s very hot down here in the summer, so I was impressed with the air conditioning in the cab. Overall, the cab is very comfortable. It has good visibility, whether you’re using the backhoe or the loader.”

“It’s an excellent machine, with very smooth and quiet operation. It has plenty of power – more power than I’ve seen in other competitive models. During the winter, the backhoe dug through frozen ground with no problem.

“The Power Lift capability of the backhoe is a great feature. I’m used to operating excavators, and the 580N is strong enough to do some of the work you’d normally need an excavator for.

“The cab of the 580N is unbelievably comfortable. Just the way everything is set up makes it easy on the operator. You don’t have to reach for anything.

“The loader bucket gives you good reach. It was very fast in loading a truck – really smooth hydraulics on the lift-and-dump. We even did snow removal, which it handled easily.”

“The 590N is a very smooth and responsive machine. We noticed many improvements compared to the M Series machines. Both the backhoe and the loader give you more reach and more power.

“The Power Lift feature on the backhoe is a big deal – you can hang a lot of weight on that boom. We used it for setting big concrete inlet boxes and end walls on a couple of storm sewer projects. It can handle the big shoring boxes, too, which is important if you’re installing long sections of sewer pipe.

“In Power Lift mode, you can idle the engine down and it’s quiet enough that you can actually talk to someone outside the machine. It’s an unusually quiet machine.

“We like the clamshell bucket on the loader. We did some grading and truck-loading with the loader bucket – very smooth operation, nice hydraulics.

“We roaded the machine a good bit between jobsites. It rides fine and has enough power to take the hills. And it’s quiet on the road. We really liked the Ride Control feature.”