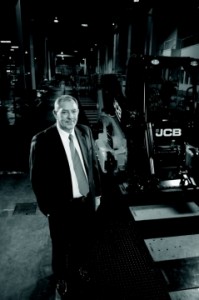 John Patterson, Deputy Chairman of JCB, has been appointed as a Commander of the Most Excellent Order of the British Empire (CBE) in the Queen’s Birthday Honors List. The honor has been awarded to Mr. Patterson in recognition of his services to British business development worldwide.

Patterson said, “I am extremely humbled by this announcement. I am very proud to receive the honor and all that it represents. This is a tribute to the many people within the JCB worldwide organization, especially Sir Anthony Bamford. I would not have been able to achieve this without his faith in me and his leadership, guidance and wisdom.”

JCB Chairman Sir Anthony Bamford said: “John’s contribution to both JCB and British business over the past 40 years has been immense and I am delighted that he has received this well-deserved recognition.”

His dedication to the industry extends beyond his role at JCB. In 2007 Patterson was elected to the Association of Equipment Manufacturers’ (AEM) board of directors.   AEM is the international trade and business development resource for companies that manufacture equipment, products and services used worldwide in the construction, agricultural, mining, forestry, and utility fields. He is a member of the Georgia Institute of Technology Advisory Board in Atlanta as well as Chairman of the Savannah affiliate board. He is a former president of the Federation of Manufacturers of Construction Equipment and Cranes (FMCEC).

Honors Lists are published twice a year at New Year and in mid-June on the date of The Queen’s official birthday. All honorees have been through a rigorous selection process overseen by Cabinet Office committees before their names are recommended to The Queen by the Prime Minister to be included in the Honors List. Patterson will receive the Honor at Buckingham Palace later in the year.