Sorry for the no-show earlier this week…

Before I get into this week’s predictions, I am going to vent. Why can’t the NCAA mind it’s own business? I mean seriously, where does it find time to investigate the most irrelevant issues. A few weeks ago, Tennessee’s freshman RB Bryce Brown was under investigation for his dealings with a recruiting “advisor” and a fundraising event he participated in. The NCAA found no wrong doing after its month-and-a-half search.

I’m not going to go into the NCAA’s infatuation with Alabama, but in the interest of relevance, I’ll cite a few recent rulings. After a laughably exhaustive investigation into a fishing trip taken by Alabama’s Julio Jones and Mark Ingram, with a non- booster, they were found to have received “impermissible benefits”. These “benefits” included food, transportation, lodging, and entertainment. For this, they were forced to donate the amount deemed impermissible to charity. How many college kids go on a trip of any kind with a family friend and are expected to pay for any part of it? Why should Julio and Mark be treated any differently?

Another example, sophomore LB Jerrell Harris has been suspended for the first six games of the season for “impermissible benefits”. A year ago, Alabama was handed another 3-year probation and a $43,000 fine for a textbook scandal that was equally as ludicrous. I disagree with the rules themselves, and also disagree with the NCAA’s choice of investigations. Alabama, like all other Division 1 schools, belongs to the NCAA, and is subject to punishment for not following its rules.

And now the NCAA has found another way to screw another great player out of a chance to compete. Oklahoma State’s star receiver, Dez Bryant, has been ruled indefinitely ineligible because he “failed to openly disclose, to the NCAA, the full details of his interaction with a former NFL player, not affiliated with OSU.” If you want to read the whole story, click here.

Why hasn’t the NCAA looked into the relationship between Deion Sanders and WVU RB Noel Devine? Here’s another example, why hasn’t the NCAA done anything about the three-year old the Reggie Bush/USC scandal? If you want to check out all the facts yourself, read this.

Now that I have vented my frustrations with the NCAA, I can talk about the good the side of college football. 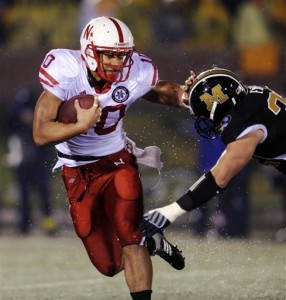 Thursday night’s match-up of Big XII North opponents #21 Nebraska at #24 Missouri was wet n’ wild. After Missouri simply outplayed Nebraska for three quarters, they subsequently imploded in the final quarter allowing all 27 of Nebraska’s points, 20 of which were in a 3-
minute 22-second span early in the fourth. Nebraska might have a claim to the Top Ten. Results are the biggest measuring stick, and Nebraska is one point away from a 5-0 start. I like them; their defense held Blaine Gabbert, fourth in the nation in passer efficiency, to 134 yards and two interceptions on 17 of 43 passing attempts. Give Bo Pelini credit, his offense isn’t always there, but he can defensively scheme with the best.

Death Valley is appropriately named; if you’ve been there you know what I’m talking about. Night games in this place leave opposing fans

cowering in fear and opposing coaches, not named Bear Bryant or Nick Saban, wondering what the heck just happened. An interesting fact, Bryant had a 14-2 all-time record in the Bayou and started a winning streak that spanned 5 coaches and three decades. Ha, don’t you just love history? Regardless, most teams have a tougher time there than Alabama, including, yep you guessed it, Florida. 2007 saw the then, top-ranked Tigers, pull out a 28-24 thriller that kept LSU’s Saturday night home-win streak alive, which is now at 32.

The obvious question is whether or not Tebow will be fit to play. I tend to think he shouldn’t play, given he suffered a brain injury. If they’re not sure now, I can’t see doctors finding any definitive evidence that he’ll be ready before Saturday. Whether he plays or not, you can bet that

all the rest of the players will still be fired up. Florida’s back up, John Brantley has been decent so far in mop-up duty, completing 73 percent of his passes for 232 yards, 4 touchdowns and no interceptions. If he does get his number called Saturday, he’ll be facing, by far, the biggest and fastest defense he’s ever competitively played against. I’m not sure he can go in there and handle it.

LSU’s struggling run game won’t get any help from Florida’s front seven. I’m pretty positive Florida won’t get beat by Jordan Jefferson, and that leaves Charles Scott to step up. He was a dominant force between the tackles last season and showed some of that brilliance last week in Athens. If LSU can get him going, they have more than a chance. He hasn’t impressed me much this year but he’ll be key. And for the first time ever I make two predictions.

He really is that good…

I’m not happy going into this game, not at all… This game is just oozing with upset sauce. Houston Nutt is notorious for having his teams play above their potential in big games. Everybody remembers last year’s incredible upset in the swamp, but let’s not forget his days at

Arkansas where every year they had an upset early and a disappointment late. My only consolation is that if anybody will make sure his team isn’t going to have a hiccup, it’s Nick Saban. He preaches finishing and playing to your potential; I believe if we do that, we won’t lose a game all season.

Correct me if I’m wrong, but wasn’t Ole Miss’s QB supposed to be a dark horse for the Heisman? Through their first four games, Jevan Snead hasn’t been impressive. His 51 percent completion rate and 9 to 5 TD to interception ratio leave alot to be desired. He started off slow last season and the Rebel faithful must be clinging to that. If they have any chance of turning their season around Saturday, it’ll start with him. McElroy on the other hand, has put up numbers unheard of for recent Bama QB’s. Since his first half

jitters against VT, he has thrown 9 TD’s and no interceptions. If he continues taking care of the ball and spreading it around it won’t matter what defense they face.

Dont’a Hightower will be sorely missed. We knew that going into last week. I’m just not sure we really believed it. Alabama fans have been blessed with back-to-back national recruiting titles and most fans believed they had a little more depth than they did. While Courtney Upshaw, Corey Reamer, and Erik Anders are great players, they all started at new positions last week. Don’t expect the LB’s to be the same this week. Kentucky exploited the smaller LB’s last week and Bama gave up three times it’s average in rushing yards (133).  Expect Saban to have a whole new look for Nutt on Saturday. In the end Alabama’s offense steals the show and keeps their streak alive at 6 games in a row scoring over 30 points.

Side note; I always have fun in Oxford.  As much as I don’t care about your football team, you sure do have some exceptionally pretty ladies. I’ll see you this weekend, and you can tell me “hotty toddy” anytime.

I haven’t seen the Barners this excited since “Independent Study Classes” were offered to student-athletes. But at 5-0, they have a right to be. And yet I sit here in utter turmoil as to who to pick. Auburn is undefeated, as they should be. WVU was their only opponent with a winning record. That 54-30 win over Ball State doesn’t sound nearly as good when you recall that Ball Sate lost to North Texas who lost to Alabama 53-7.

Guz Malzhan knows offense. And though he’s shortly removed from the high school coaching ranks, he has come through in SEC play. He’ll probably continue that against Arkansa’s woeful secondary this week. Junior Chris Todd’s rise from part-time obscurity has been impressive. I’ll admit, I gave him no chance after his shoulder surgery on top of last season’s dreadful 903-yard, 5-TD, 6-interception performance. He has come through this season along with hard-nosed RB Ben Tate, who is second in the SEC, in rushing, with 108.0 ypg. Again, I have to question these numbers when I look at the

With offensive wiz Bobby Petrino calling the shots, Arkansas isn’t hurting. I may have been too quick in crowning Ryan Mallet as king of SEC QB’s, but I still think he will be great. These teams are overflowing with offensive talent but their defenses are both sub-par. Auburn has allowed over 22 points in all but their first game against lowly Louisiana Tech. Even the anemic spasm that Lane Kiffin calls his quarterback had success against the Tigers. This should be a high-flying affair, but Arkansas, brimming with confidence after last week’s rout of A&M, brings Auburn back down to earth.

Isn’t this just a great week for the SEC. Seriously, I’ll be watching all these games intently. For what it’s worth, Kentucky played Bama the best of anyone, so far this season. Now, whether this bodes well for them against South Carolina, no one knows. South Carolina is the favorite

and I tend to agree. Their offense, while sporadic, can still put up points, and Steven Garcia has been making much better decisions compared to this time last year. Their defense is among the best in the country, and I don’t have to talk about my respect for Eric Norwood. He is a dominant force and continues to rack up sacks at an alarming rate. He should have a field

day busting through the Wildcat’s shaky line. If he does, I can’t say I have confidence in Mike Hartline. His performance last week was dreadful. Kentucky’s lone bright spot is speedster and do-it-all sophomore, Randall Cobb.

All this being said, I’m still worried South Carolina won’t live up to the hype. Teams from that state tend to be overrated, uhhuuh Clemson… Anyway I put my faith in the numbers and based on that, South Carolina should win. Don’t be surprised if they have a let down though.