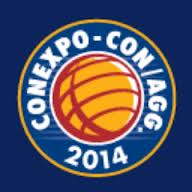 CONEXPO-CON/AGG and IFPE 2014 took center stage in Las Vegas March 4-8 with tremendous energy and serious buyers. Total registration of 129,364 soared past the last edition of the shows as they achieved the second-highest attendance in their history. The shows also set new records for exhibit space, number of exhibitors and education tickets sold.

The co-located CONEXPO-CON/AGG and IFPE, at the Las Vegas (USA) Convention Center, delivered a global showcase of the newest product innovations and technologies for the construction, construction materials and fluid power/power transmission/motion control industries with more than 1,000 new products and services on display.

Attendees also took advantage of the shows’ strong industry education programs and the unparalleled opportunity to connect with industry peers, take the pulse of what’s happening and learn what the future holds.

“The enthusiasm and traffic on the show floor was just incredible. Exhibitors cited the high quality of attendees; they told us these were serious buyers and reported robust sales to existing as well as new customers that exceeded their expectations,” stated Megan Tanel, CONEXPO-CONAGG show director.

More than 75 percent of show visitors were in managerial roles (with 36 percent of these with the top titles of president/owner and vice president/general manager/chief financial officer).

A record 41,000 education ticket sales were sold to the shows’ education programs, underscoring their relevance to helping attendees succeed in today’s business environment.

“CONEXPO-CON/AGG and IFPE 2014 reflected the feeling of momentum building in the industry. We are industry-run shows with industry needs put first; these show numbers are a testament to the value attendees, exhibitors, and other stakeholders derive from their participation,” stated Melissa Magestro, IFPE show director.

The shows were chosen for the prestigious U.S. Department of Commerce (DOC) International Buyer Program, which helps facilitate global attendance. More than 50 official international attendee delegations were organized by DOC as well as show industry partners.

More than 95 allied associations and groups were official supporting organizations, coming from the U.S., Canada and 16 other countries worldwide.

Several national industry associations held their annual conventions or high-level board meetings at the shows; they joined hundreds of other industry and company meetings, from large events to smaller committees and other groups, all taking advantage of the shows to meet and share knowledge and learn from one another.

Reinforcing the global scope of the shows were eight international exhibit pavilions: CONEXPO-CON/AGG with China, Ireland, Korea, Spain and United Kingdom, and IFPE with China, Italy and Taiwan.

Show safety and education/training events at the shows included: