Construction input prices experienced their most rapid monthly decline since February 2016 in November, falling 0.5 percent according to the U.S. Bureau of Labor Statistics. Despite the month-over-month fall, input prices are up by 0.5 percent on a yearly basis for the second consecutive month.

Nonresidential input prices fell 0.7 percent for the month but are up 0.4 percent on the year. Crude petroleum, natural gas and unprocessed energy materials prices have all risen significantly since November 2015. Only three key inputs prices‚Äîplumbing fixtures and fittings; nonferrous wire and cable; and prepared asphalt, tar roofing and siding products‚Äîhave fallen on a year-over-year basis.

‚ÄúThe current period of slack material prices may soon come to represent the calm before the storm,‚Äù said Associated Builders and Contractors Chief Economist Anirban Basu. ‚ÄúIn recent days, various oil producers have continued to negotiate production ceilings in an attempt to boost prices. While oil prices remain low by 2014 standards, they have increased significantly over the course of the year and have roughly doubled since hitting a cyclical low point in February 2016. Natural gas prices have also been tilting higher. The same can be said for shipping costs, copper and other items that can impact the financial performance of construction firms.

‚ÄúThe recent rally in U.S. stock prices suggests that investors believe that America is now positioned for a period of more rapid economic growth,‚Äù Basu said. ‚ÄúThis belief is also consistent with the notion that inflationary pressures will continue to build and interest rate increases will be more aggressive than expected prior to the presidential election. With wage pressures building, contractors will need to be extremely careful in bidding on projects, particularly large ones. Construction cost increases are likely to prove more profound than what has been experienced in recent years, and contractors should consider that while negotiating their contractual commitments.‚Äù 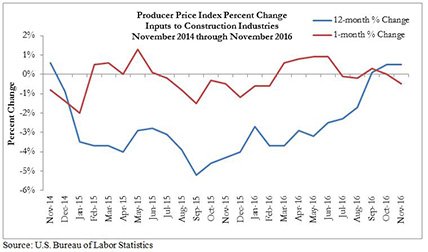