” Demand for global commodities has weakened even as supply of many inputs continues to be elevated.” ā€”ABC Chief Economist Anirban Basu 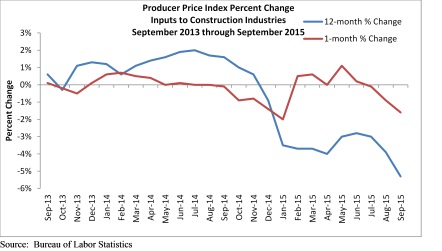 Prices for inputs to construction industries plunged 1.6 percent in September after shedding 0.9 percent in August, the Bureau of Labor Statistics reported today. Year-over-year prices were down 5.3 percent for the month, the largest yearly decrease since October of 2009. Inputs to nonresidential construction prices also declined, losing 1.6 percent for the month and 6 percent for the year. Only three of the 11 key input prices expanded on a monthly basis in September, while six experienced double-digit year-over-year declines, according to analysis by Associated Builders and Contractors.

“The global economy has continued to soften in recent weeks, with additional concerns directed at formerly fast-growing nations like China, Brazil and Russia,” said ABC Chief Economist Anirban Basu. “Europe continues to muddle along and the Canadian economy remains relatively flat. All of this has conspired to weaken demand for global commodities even as supply of many inputs continues to be elevated.

“For much of September, there was a belief among some that the Federal Reserve would raise short-term interest rates during that month,” said Basu. “That belief helped keep the dollar strong, which also helped to keep commodity prices low. When the Fed made the decision not to raise rates, the dollar weakened a bit, allowing oil prices to edge higher. The implication is that October PPI is unlikely to be as deflationary as September.”

The key input prices that fell or remained flat are: